Many a seagoing cowboy told me in an interview, “I was so seasick that at first I was afraid I was going to die, then I was so sick I was afraid I wouldn’t die.” I’ve since discovered this is a paraphrased Mark Twain quote, which the cowboys may have known or not known; but nevertheless, it was a very personal experience for many of the cowboys. 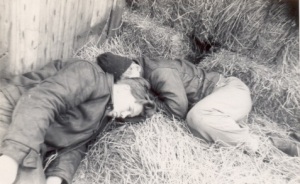 The Cleveland Clinic website tells us, “[Seasickness] happens when your brain receives conflicting messages about motion and your body’s position in space.” For preventing seasickness on a ship, they say, “When making reservations, choose a cabin in the middle of the ship and near the waterline. When on board, go up on deck and focus on the horizon.” As if! 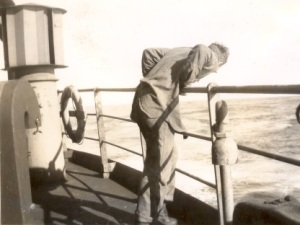 A cowboy “feeds the fish” at the rail of the S.S. Earlham Victory on the way to Trieste, Italy, in January 1947. Photo credit: John Hostetler.

The poor seagoing cowboys didn’t have such options. Their quarters were usually in the cabin under the gun deck at the back of their ship, where they would feel the ups and downs of the ship to the Nth degree. And many of the work stations were in lower holds.

Owen Schlabach pretty well sums up the cowboys’ experience in his account of his trip on the SS Mount Whitney to Poland in November 1946:

The ocean was nice and calm the first few days, then it started to get rough and shook the boat. Many of the boys got so seasick they could not do their work anymore, leaving only Bob Flick and me [to] care for ninety horses. Some were so sick they looked blue-greenish around the eyes, and got really thin because they could not eat. One time I saw one of the ministers sitting on top deck in a corner looking so sick I thought he was dead. After watching him for a while, I saw to my relief that he was still breathing a little. No one died on this trip, but some were so sick they wished they could.

In Newport News I met a man who was in the Army who said if I listened to him, I wouldn’t get sick. This sounded like music to me. I told him I would be glad to listen. He said on the ship we would have free choice of soda crackers, and if we would keep our stomachs full and wouldn’t drink anything, we should not get sick. It worked, and none of us five got sick.

Other cowboys had different remedies. Melvin Bradshaw, cowboy to Poland in May 1946 aboard the SS Carroll Victory, wrote:

I had never traveled before on the ocean and was a real landlubber. The beginning of the trip was rather mild but the stench in the lower decks from horses and their excretion made for rather poor sailing conditions for one inexperienced in sea travel. I found that the more marked movements of the ship up and down were not as bad as the swaying motion from side to side. When I felt that I was going to get sick I would lie on my back and look up through the opening in the upper decks. If I could lie still and see the sky my stomach would settle down.

Fred Teach, aboard the SS American Importer to Germany in 1953, noted in his journal, “I had a slight attack of indigestion today, ate cucumbers and peanuts. Feel fine now.” Nelson Heatwole said of his trip to Poland on the SS John Barton Payne in May 1946, “For 2 days I suffered from seasickness but managed to keep up my strength and do my work with the help of crackers, lemons and liquids and some assistance of other cowboys.”

Cowboy Carl Geisler offered this musing, printed in a March 1946 Civilian Public Service Bulletin. He later served as foreman on the SS Rock Springs Victory to Ethiopia in March 1947.

(In case the above methods do not prevent an attack, the best way of stopping it is to go lean up against a shade tree.)*

1 thought on “Seasickness: The Malady of the Seagoing Cowboys”