My two amazing Polish contacts, Magda and Grace whom we met in my last post, had one surprise after another for me during my short visit to Poland the first of October 2013. Before leaving home, I had sent Magda a list of the recipients of Heifer Project’s first shipment to Poland that I had found in one of my rummaging trips to the Heifer International archives, hoping that some of those recipients or their descendants could be found. This was the shipment of the S. S. Santiago Iglesias from my March 11 post. 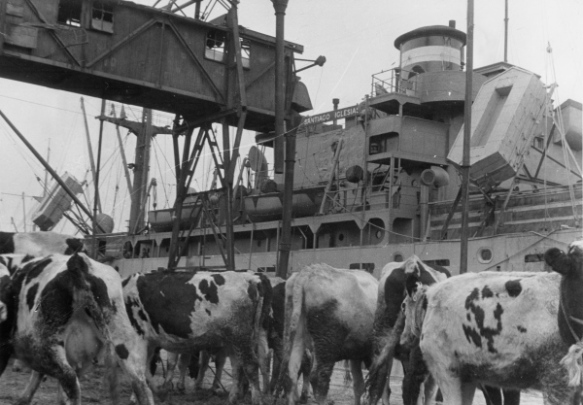 The list I sent Magda included the names and towns of the recipient farmers and tag numbers of the heifers. Grace, being Catholic and living near those communities, went to each village and posted the names of the recipients from that village in their Catholic Church. And she found one of the men! Stanislaw Debert. 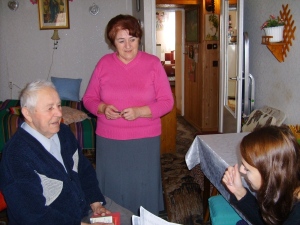 Stanislaw was 89, soon to be 90, when I met him, and I had a delightful visit with him, his wife, and a daughter; and with Magda interpreting for me, I was able to hear Stanislaw’s story.

After WWII, Europe was a mass of shifting populations as country borders and control of countries changed. As we have seen in previous posts, people of German heritage living in eastern European countries were sent back to Germany, no matter how many generations they had lived in the east. Before the war, the area of Poland around Gdansk had been part of Germany, so the Germans had to flee when it was given back to Poland. Stanislaw, on the other hand, fled, from his home in one part of Poland to Gdansk. He had been a combatant for the Polish Army during the war. He said he left his city of Kielce clinging to the roof of a train with only the clothes on his back. Stanislaw and his wife and small child were resettled, then, in one of the abandoned houses outside of Gdansk on 50 hectares (123 acres) to start their new life in the fall of 1945.

They were lucky to receive a house. “We invited five other families to live there,” Stanislaw said. “There was nothing there to eat when we arrived. No fruits. No vegetables. It was cold, and we were sick all the time.” The heifer they received from the Heifer Project, along with two horses and food goods from UNRRA, helped them survive.

“Our heifer was very skinny when we got her, but after a couple of months, she fattened up. We kept her in the house to keep her safe from the Russians,” he said. “They were stealing cows for meat.”

Stanislaw said the Polish government determined who would receive a horse or cow. “We milled grain for flour and fed the cow the leavings. Our cow gave great milk,” he said. “The cream was so thick you could cut it like butter. She was our only cow for five years until she got sick. We had to kill her. The children cried.” With tears in his eyes, he said, “That was a sad time.”

Stanislaw’s daughter shows us one of Stanislaw’s awards for the studs he raised on his farm. Photo credit: Peggy Reiff Miller.

Stanislaw eventually turned his farm into an award-winning stud farm. Today his grandson runs the farm, which has doubled in size but, to Stanislaw’s chagrine, no longer has horses. Only grain, which worries Stanislaw.

When it came time for Magda, Grace, and me to leave, Stanislaw said, “I didn’t expect so many emotions today that someone would find us on a list in America and remember us so many years later.” He wanted to know, “How can I thank the people for this gift of a heifer?” I told him, “You just did. I will see that your thanks get passed on.”

What a joyous day for Stanislaw, his wife, and daughter and myself remembering the importance of a gifted heifer. Photo credit: Magda Starega.

Multiply these stories of recipients in Germany and Poland over and over again, and you can see the impact the work of the seagoing cowboys in delivering these animals has had in helping to rebuild a broken world.