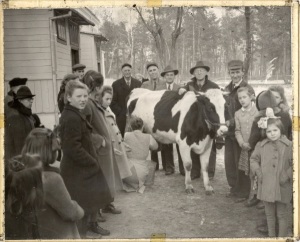 The heifer named “Hope” in my children’s picture book The Seagoing Cowboy is based on a real heifer named “Hope” that was sent to Poland in late 1946 on the S. S. William S. Halsted. Here is an edited version of the real Hope’s story as told by L. W. Shultz in his article “Poland Has Hope”:

“Hope” is a beautiful Holstein cow. She was born (1944) on a Pennsylvania farm in the United States of America. While quite young she was chosen to bring relief to hungry, thirsty children in Europe. She was reared on the farm of Rudolph Kulp near Pottstown, Pennsylvania, in the Coventry Church of the Brethren, the second oldest congregation of the Church of the Brethren in America.

The month of October 1946 found Hope on the Roger Roop farm near New Windsor, Maryland, waiting to be shipped to Poland. Finally on November 1, 1946, with 332 other beautiful Holsteins, Guernseys, Jerseys, and Brown Swiss, she was loaded on the William S. Halsted. Hope had a very narrow escape when the ship collided with the Esso Camden gasoline tanker only three hours out from port Baltimore in the Chesapeake Bay. However, the explosion, fire, and damage did not cause any fatalities among either man or beast. 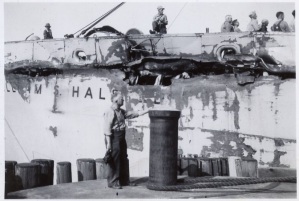 But it meant seventeen days of waiting while the ship was in dock for repair. Hope was cared for in the Union Stock Yards in Baltimore. On November 19, she was reloaded on the ship and started again for Danzig (Gdansk), where she landed on December 9, 1946. After some delay, she went on a railroad train to Warsaw and then on to the village of Konstancin where she found her new home, with another cow from the ship, in the orphanage of Villa Skaut. 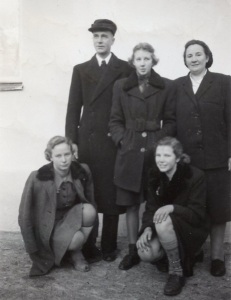 Here 130 orphans are being cared for by Leonid and Augusta Jesakow and their staff of workers, including their daughters, Irene, Lily, and Mary, all born in America.

What a welcome the children gave these cows! Hope also had a sturdy heifer calf to care for and to present to the orphans. This addition to the animal population at Villa Skaut was quite an event. Hope was giving ten liters of milk each day and will give more when spring comes.

On Christmas Day, 1946, after a morning service, pictures were taken of some of the orphans and Hope, while she was being milked. Present from America to bring these gifts to the children were Brethren Service workers Bruce and Clara Wood, and seagoing cowboys Lee R. Cory, John Miller, Harvey Stump, and Lawrence Shultz. These men received the thanks of the children and the orphanage management for the cows, candy, pencils, combs, toothbrushes, note books, etc., which were given as Christmas gifts. It was a never-to-be-forgotten Christmas time. Christmas Eve, presenting gifts with St. Mikolaj (St. Nicholas). Christmas services on December 25 in the morning, and the singing of Polish and English carols and songs in the evening until late at night. Thanks to Jadwiga, the teacher, and Francisek, the soloist.

Hope is really a life line for these children, Halia, Marta, Alicia, Wanda, Maria and all the rest. To all American Christians who have remembered them with food, clothing, and now Hope, they say “Dziekuje” (thank you).

And to all my readers, I wish a Blessed Christmas and a fruitful New Year ahead!

1 thought on ““Hope” the Heifer: A Christmas Story”