The seagoing cowboys on the second livestock trip of the S. S. Park Victory faced a much bleaker experience than those who went to Trieste. It was a rougher ride in wintry weather, for one thing. And the destination more devastated. 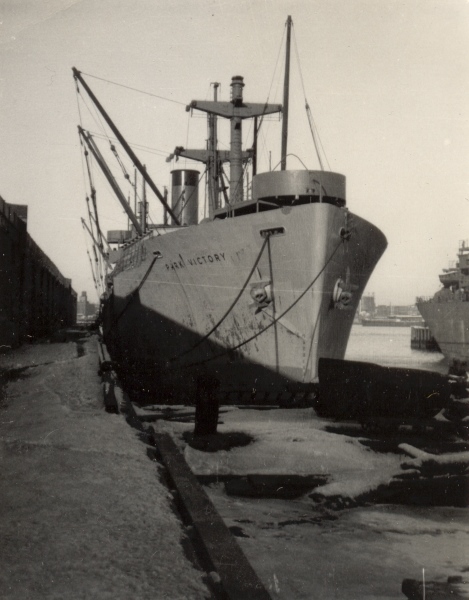 Seagoing cowboy Daniel Hertzler says in an article for The Mennonite, “We were a diverse group of cattlemen…. Ten states and two Canadian provinces were represented. There were 16 Mennonites, 10 Brethren, one Methodist, one Baptist and one Presbyterian.” Of these men, the ship’s radio operator Will Keller notes, “Some younger, some older, some conscientious objectors to war, some adventurers, all well-behaved without exception.” 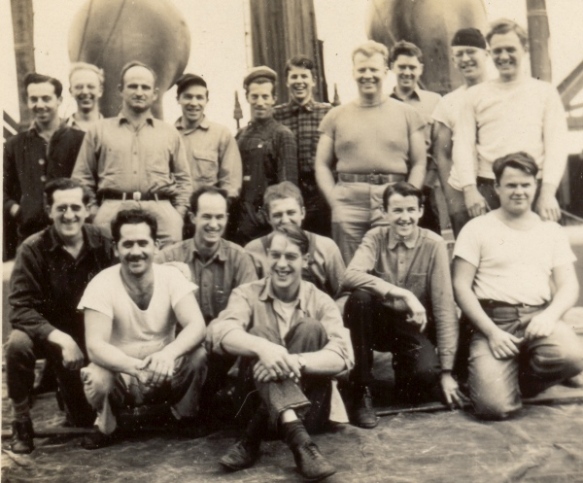 Cowboys started arriving December 18 and had plenty of time to get to know each other before the work began, as a snow storm and sickness of horses held 13 train car loads up in Kentucky. Keller notes that cattle were then substituted for the horses. Finally, on December 24, with all the cargo loaded, tug boats began pulling the Park Victory from the pier in Baltimore and moving down the Chesapeake Bay.

“Everyone was excited,” notes assistant cowboy supervisor Harold Hoffman in his diary. That is, until the ship anchored off Norfolk, Virginia, where it sat for three days waiting for a full ship’s crew. Radioman Keller explains, “Anchored midstream away from any access to land so as to not lose crew members or cowboys over Christmas holiday.”

On Christmas Eve, Hoffman notes the finding of a dead mare. “Some start,” he says. But “What a Christmas dinner,” he writes the next day. “Stewards dept. really put themselves in good with the cowboys.”

However, it wasn’t such a good Christmas Day up top. “Had messy time feeding top deck in rain tonight getting the canvas back on the feed that a hard wind blew off,” Hoffman says. An omen of the chilly, cloudy, rainy weather and choppy seas that plagued the ship all the way across the Atlantic.

The ship set sail December 27, and two days later Hoffman writes, “This morning we began to get a real touch of sea life. Two of the boys went to the rail after breakfast. Most every one was affected some.” Later, I was “standing in line at slop chest [ship’s store] when it seemed the ship went on her side. Passageway doors opened and six inches of water came in. Soon the fire alarm. A rush for life jackets. Everyone wondered if it was drill or real. The crew was serious. Another alarm, some thought it was to abandon ship…. I rushed for my life jacket. The First Mate came through, said the last alarm was the dismissal.”

Radioman Keller notes, “Not all animal manure developed on board will be discarded overboard. Odor becomes overwhelming in some places. Horrible below deck.” Pity the poor cowboys who were assigned to those holds!

The distribution of heifers and horses on the S. S. Park Victory to Poland, Dec. 1945. Drawing by Harold Hoffman.

Arrangement of the livestock in the Park Victory holds, Dec. 1945. Drawing by Harold Hoffman.

Finally, on January 6, “Sighted land of Scilly Islands,” says Hoffman. “Much excitement about it.” The ship made its way up through the English Channel to the White Cliffs of Dover, where it anchored for the night. Of the cliffs, Hoffman says, “They are a chalky-Limestone rock. White indeed…. This trip is really swell. It is like a dream, such a thrill.”

If the White Cliffs of Dover were thrilling, the next leg of the Park Victory trip was chilling, in more ways than the weather.