The Heifer Project, today’s Heifer International, made six shipments of dairy cattle to Italy between December 1947 and October 1948 on the S. S. Humanitas. The vessel was a renamed Liberty ship sold to Italy after World War II and put into service transporting coal to Italy in its lower holds and dairy cattle quartered on the top deck. The livestock trips of the Humanitas had two major havoc-causing events in common. Today, we’ll look at the havoc caused by the weather on three of the trips. 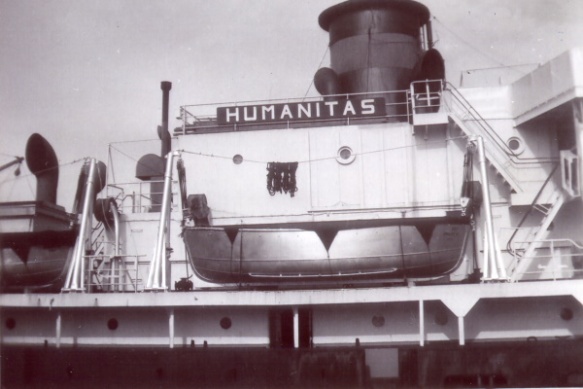 On the Humanitas’ first trip, 17-year-old seagoing cowboy Charles Cutting set out from California for an adventurous time in Europe. He writes a delightful account of his experience in his book 1947 Europe from a Duffel Bag, available for purchase online for anyone interested in reading his full story.

The Humanitas departed from Baltimore December 3, 1947, with six seagoing cowboys, 160 head of cattle, and 10,000 tons of coal, causing the vessel to ride low in the water. “Our hope for fair weather was soon just a memory,” Cutting says. Under a heavy cloud cover, the wind whipped up waves that swamped the deck on the third day out and flooded the cowboys’ sleeping quarters through the air supply vents.

“Three a.m.!”, Cutter says. “There was a terrible shudder and crash….A pyramid wave had crashed down on the ship.” The cowboys were sent out to help rescue the cattle from the havoc and debris surrounding them until the ship’s officers ordered them back inside. They were entering a hurricane. The ship emitted frightening sounds as it slapped down into the waves’ troughs and back out again. Then came the calm of the hurricane’s eye, only to be bashed again on the other side of it. When deemed safe, the captain sent the cowboys back out to free the cattle. Only two had been injured, with broken legs. They were shot and became a bonus for the cooks.

The next trip left Baltimore January 30, 1948, with 18-year-old Byron Frantz on board. The Humanitas had to cut through six inches of ice in the Chesapeake Bay to get into open waters. Once it hit the warmer Gulf Stream, the ship again ran into a storm. With the weight of the coal, Frantz says, “mid-ship was only 10 feet above water. The storm caused a wave of water to come over the mid-ship and collapse a part of the ‘heifers’ home.” These cowboys, too, had a rescue job on their hands once it was safe to do so.

The Humanitas’ fourth trip left Baltimore June 9 and didn’t hit foul weather until it reached the Mediterranean Sea. “Once we were through the Straits of Gibralter, the weather drastically changed,” says cowboy David Harner. “The seas began to get rougher, and suddenly we were in a full blown storm. I was a little concerned because as a child my parents took me on a trip that included a visit to Puget Sound near Seattle. Lying at anchor in the Sound was a Liberty ship, actually half a Liberty ship, the forward half missing. When we asked a local sailor, he explained that these ships were so hurriedly made for the war effort that they often broke in two.”

“The blur on the right was seawater blowing up on the bridge’s windshield,” says Harner. Photo courtesy of David Harner.

“At the height of the storm, the deck plates between the No. 2 hold and the superstructure began to buckle, making a horrible screeching sound, then a dull BOOM as the bow dropped back into a wave trough. Señor Cortali, the radio officer, explained how and why this was happening. When I asked him if we were in danger of breaking up, he just shrugged his shoulders and walked away. The next morning the sea was calm. A check of all the cattle revealed that they were all OK, unfazed by the storm. We put dry bedding over the soggy mess and completed our chores.”

Charles Cutting’s voyage also hit foul weather again in the Mediterranean Sea until nearing its destination of Naples, Italy. The ship unexpectedly reduced its speed “to a gentle crawl.” Cutting says, “We inquired, but the captain was evasive and would not tell us why. We sensed something unusual was involved.”

2 thoughts on “Heifers and Havoc on the S. S. Humanitas, Part I”