After UNRRA disbanded in early 1947, the Heifer Project continued, shipping on a more limited scale. Many of the cowboys used these Heifer Project trips as their transportation to Europe for volunteer or work assignments. Merle Crouse was one of those young men, sailing to Germany in November 1952 to his Brethren Volunteer Service project. 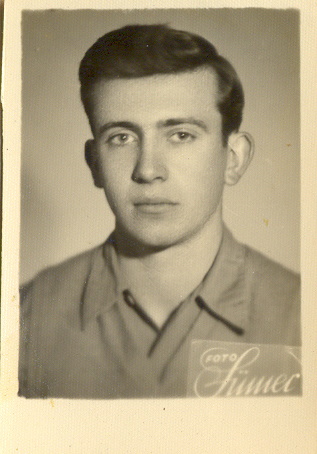 He recounted his trip with two fellow cowboys to his parents in a letter from Germany:

“We finally left New York harbor on the night of the 22nd on the American Traveler with our 63 cows including Green Hill and Easton’s, a bunch of shelled corn, and scads of Rockingham County (Va.) frozen broilers. Between the cows and the Rockingham fried (potential) chicken, I felt at home with the cargo at least. In the morning of that day we had run around in big shoddy New York to the German consulate on 42nd Avenue (in overalls) where we got German visas stamped into our passports. Getting our passport and visas were our only red tape since cowboys no longer need seaman’s papers as they are now considered as passengers rather than crew.

“. . . Our setup was such that we all divided the cows into 3 sections with each of us in charge of our own bunch. I named all mine—Mitsy (the only one milking, left her calf in U.S.), Salty, Malty, Sleet, Fog, Polly, Molly (a beautiful purebred Jersey which produced our only calf the day before we got in port), Fransosisch (Deutsch for French—she had a sneaky French personality), Maw (La Pierre), Gertie, Edy (pantry girl at La Pierre), Tonto (lone Ranger’s Indian), Parvin (Parvin Biddle from grammar school), Ada (the Ayrshire), Trigonometry, Futility, Temptation, Baldy (had a white topknot) and Mamie (Ike’s wife). The other fellows only named a couple of theirs.”

All three of the cowboys were experienced farmhands. The Heifer Project shipments generally did not have a veterinarian on board like the UNRRA shipments had, so the cowboys were left to their own devices. Crouse describes the difficulties they had with a cow in labor:

“She didn’t appear to be near freshening so we let her go until the following morning we went down and found her bearing a calf which was huge and dead. We tried to help her for an hour but got only the head out so we went up to see the officers as instructed if emergencies arise. The purser (a surgeon-general in the Navy) was afraid to apply his medical knowledge to cows but was ready to do any thing we said, the first mate was our contact man with the captain who said that we could use anything on the boat, but try to save the cow. None of them could offer any knowledge aid, so the 1st mate got the boatswain and 3 crewmen to come with block and fall and we pulled so hard that the cow was dragged out of her stall and nearly choked because we had her head tied on the other end. Dudley and I searched intensely to see if we could relieve the point of friction which was at the pelvic bones of the cow. Here the calf’s front legs were folded wrong and was too much to get thru the space naturally provided. Pulling was no answer so, after a conference we decided to try to keep her living in that condition until we hit port at Bremerhaven, Germany and a veterinarian. . . . We had 36 hours to wait before we hit port and the cow died 32 hours later at 4 A.M. tho she seemed well at 11 P.M. We hated to lose her but could do nothing else for her.”

The cow wasn’t all they lost, however. “We made a mistake by leaving our boots as usual in the hold with the cows when they took her out at Bremerhaven, since a thief (probably German longshoreman) stole my good old 5-buckle artics and left me bootless. . . . I now trust no one with anything.”

For anyone out there who has a hankering to volunteer somewhere, this is a great place to do it! A lively community of both young adult, in-transition, and retired short-term and long-term volunteers (including several from overseas) gathers here. They serve in maintenance, gardening, education, the visitor center/gift shop, dining, the farm – wherever volunteers can be useful. Housing and a stipend are provided.

The mission of Heifer International to end hunger and poverty and care for the earth binds the volunteers and staff together in a common purpose that forms a close-knit community. A potluck meal is shared year-round on Thursday nights. During the height of the snowbird season, game nights are enjoyed on Tuesdays. Special events, like a pie baking contest, Memorial Day cookout, and the annual “Hoof it for Heifer” race at nearby Petit Jean State Park, pop up year round. And Northwest Central Arkansas is a beautiful place to explore on days off.

Since I’m not a volunteer, but rather came to sequester myself to write, I rented one of the apartments available to guests. Very comfortable and enjoyable! 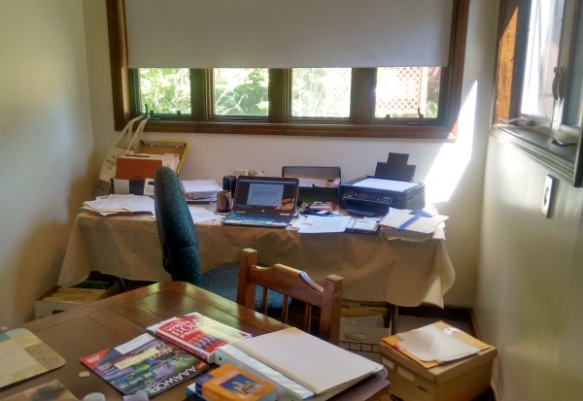 My make-shift office in the dining nook of Rupel Apartment.

Most volunteers live in the private volunteer housing area of the Ranch. The yellow building on the left is the “Com-shack,” the volunteer community building where potlucks, game nights, etc. take place.

The Dan West Visitor Center and Gift Shop is where a visit to the Ranch begins.

Volunteer Aly Pagano from North Carolina welcomes visitors and gives them their first introduction to the Ranch. 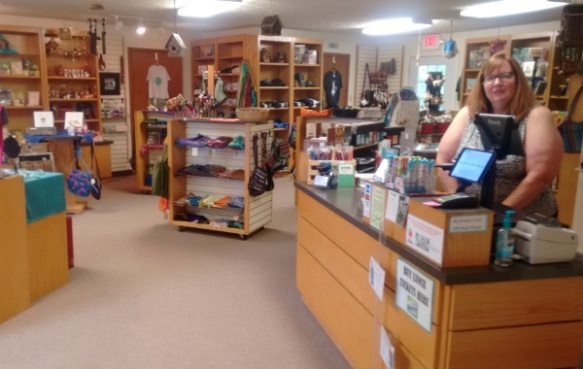 Three-year farmer apprentice Michelle Michalek from Michigan prepares the chicken nursery for its next batch of chicks. 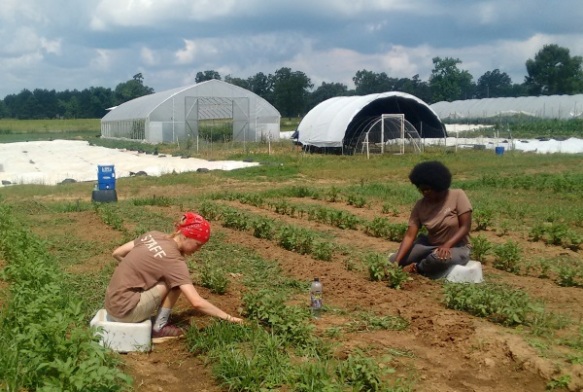 Volunteer Marie Berniere from France and three-year gardener apprentice Tradesha Clark from Boston tend the garden on a hot day. 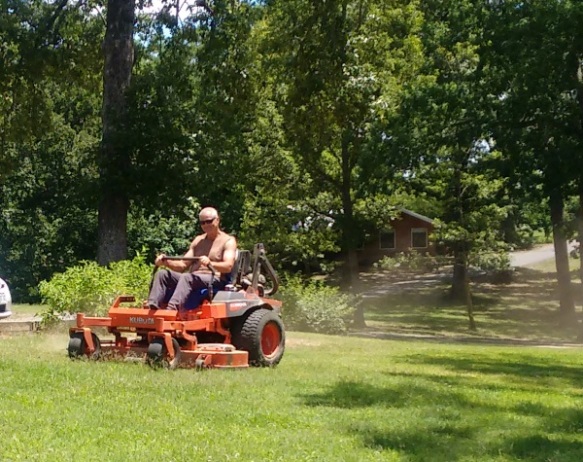 My husband Rex uses his building contractor background to design and construct a new electric house for the RV area.

When not needed on the mower, Bob helps Rex finish the electric house.

Mission accomplished! Much to the satisfaction of those who bring their RVs to live in while volunteering. 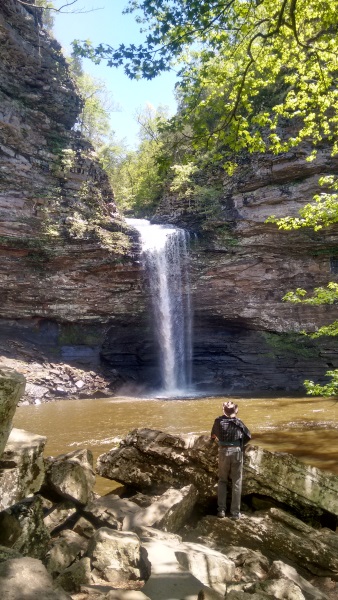 Nearby Petit Jean State Park is one of our favorite places to go on weekends to soak up the beauty of the Arkansas Ouachita Mountains.

But we needn’t go much further than out our apartment door to enjoy stunning views and absorb the peaceful surroundings to the accompaniment of bird songs.

A wonderful benediction to our two-month stay.

We ended our time at the Ranch June 8. We’ll be back!