The seagoing cowboys of the S. S. Santiago Iglesias, like almost all cowboys who went to Poland, were immediately struck by the devastation that surrounded them. “No one can imagine the damage until it is seen,” Pennsylvania cowboy Milt Lohr wrote in his diary, amazed that people still lived in the ruins, and others were still buried beneath them.

Four days after arriving, city welfare worker Anna Yawaska came to take two car loads of cowboys through the rubble to visit an orphanage with almost 700 children. “They range in age from 1 year to 14 years,” Lohr says. Some of the children entertained the cowboys with songs and recitations – all in Polish. “We didn’t understand a word,” says Lohr. Even so, the children captured the cowboys’ hearts.

Another day, on a trek into the country, Lohr and ten other cowboys happened onto a battlefield. “The trees were about all stripped of their limbs to a height of 40 to 50 feet,” Lohr says. The cowboys found foxholes, trenches, spent shells, German cannons, wrecked tanks, a destroyed barracks, and graves with German helmets on them. All reminders of a month-long battle only months earlier between the Germans and the Russians for control of the area.

Lohr writes of meeting Americans who had gotten trapped in Poland at the beginning of the war. Like the man from Buffalo, New York, who had come over to settle an estate just before the war and hadn’t heard from his wife in the USA since 1942. And a mother and two daughters from Detroit, Michigan, who had the misfortune to be in Poland on a European tour in 1939 when Germany declared war there and couldn’t get home. They were a rich source of information for the cowboys.

While in port, Lohr records seeing several ships come in with Polish soldiers, refugees, and prisoners of war from such countries as England, Denmark, Sweden, and Germany. Cowboy supervisor Clifton Crouse wrote home of an English ship delivering 1100 Poles who had been in German slave labor. “We saw them going by the hundreds, taking their few belongings with them, on sleds, on their backs, trucks, etc. They looked happy, but I’m afraid they will be badly disappointed when they find out conditions.”

The highlight of the trip for Indiana cowboy Clarence Sink was a tour into the country to meet recipients of the Heifer Project animals they had delivered. “After traveling about 40 miles in the back of a truck,” he says, “we came to one village where they had a bobsled and team waiting to take us on. The first place we stopped was a typical little peasant hut. We stood and talked in the kitchen awhile and the lady of the house opened what we thought was the pantry door, and there in a little room was a fine Brown Swiss heifer that we had brought over from America. She was bedded down in deep straw and the family told us that they carried water to her. They stood with tears in their eyes because they were so appreciative.

“The climax of the whole day’s trip came about three o’clock in the afternoon,” Sink says, “when the people prepared a meal for us in one of the homes. Many of the people of the village had gathered.” Spokesmen for both groups exchanged meaningful greetings. “Then we sang and had grace for the meal of milk and eggs.” It was “a very sacrificial meal,” Sink says. Likely especially so, because this was an added event; the celebration meant for this crew of cowboys was mistakenly given earlier to the crew of the S.S. Mexican, in port delivering UNRRA animals at the same time.

Of the trip as a whole, Sink concludes, “It is our conviction that the Heifer Project has been successful not only because we have sent them cows but also because we took them our love and concern. We ate with them in their homes and we sang and prayed together. Missions of this nature will go a long way in hastening the day when we shall be brothers indeed.”

Severely crippled by World War II, Poland became the third European country to receive animals from the Heifer Project. Between November 1945 and August 1948, Heifer made seven shipments to Poland sending 1038 head of cattle and 45 horses. [See the story of the S. S. WIlliam S. Halsted here.] Shipments ceased when Russia achieved a firm grip on Poland. After the fall of Communism in the late 1980s, Heifer resumed assistance to farmers there for a number of years.

Less than a month after V-E Day, the Heifer Project Committee was already laying plans for shipping to Poland. Their June 3, 1945, minutes recorded a vote that “We make shipment of animals, not to exceed 150, to Poland through UNRRA to be distributed by National Cooperatives, unless a better way is found.” Target date for the shipment was July 15.

With so many pieces of the shipping puzzle to be put together, however, it wasn’t until November 10 that the S. S. Santiago Iglesias pulled away from Pier 6 in Baltimore, Maryland, with 18 seagoing cowboys, 150 Heifer Project dairy cattle, and another 223 UNRRA cattle on board. Besides the bedding and feed for the animals, cowboy Milt Lohr reports that the ship also carried a cargo of 1189 drums of lard, 12,274 cases of soap, 3,371 tons of fertilizer, 12,560 drums of diesel oil, and 1,215 drums of fish oil. Relief packages from Polish officials who met the ship in Baltimore added to the cargo, as well.

On arrival in Poland November 28, the plight of the people soon became evident. “As we entered Danzig,” reports cowboy Clarence Sink, “we beheld a once large beautiful city now laying in ruins, ninety percent destroyed. . . .The unloading barns had all been destroyed, so our cattle were swung ashore and turned loose along the street. All of the feed was also swung ashore. . . .Early the next morning, about fifty people gathered and we were told that these people had walked in as far as fifty miles, from various villages, after these cattle. The Secretary of Agriculture from Warsaw was there and had charge of the distributions and all these cattle were driven, on foot, to the rural communities. [Read the story of one of those recipients here.] 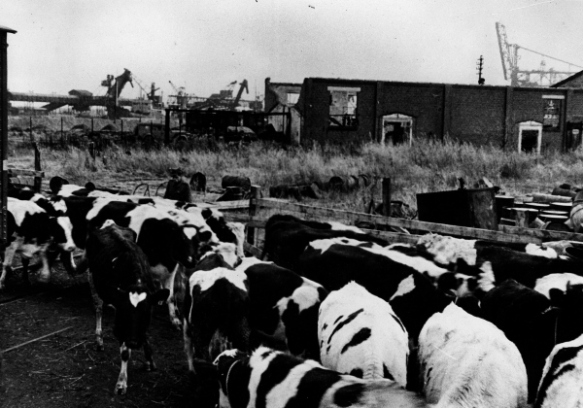 Damaged warehouses and the litter of battle are grim reminders of the war as cattle leave the docks for Polish farms whose dairy cattle were destroyed during the fighting. UNRRA photo.

“Our unloading was slow,” Sink says, “because the men were so weak, physically, that they could only work an hour or so of their eight hour shift. The Commander of the Port, who was in charge of War Shipping, informed us that all of the dock workers had been living on less than half the required diet for body sustenance for over six years.” Cowboy supervisor Clifton Crouse told his family the stevedores were so hungry that they emptied five drums of lard, a handful at a time, putting it in their pockets.

Because of the slowness of unloading the ship, this crew of seagoing cowboys had three weeks to absorb the sights, sounds, and smells of postwar Poland. More on their experiences in the next two posts.

These Polish farmers and the guard were delighted to find 14 unexpected calves born on the Santiago Iglesias at sea. UNRRA photo.