After enduring storms at sea, the William S. Halsted delivers its goods to Poland and faces yet more trials, as Robert Ebey reports:

The Polish Department of Agriculture sent a truck at 1:00 p.m. to take us on a tour of Danzig, Gydinia and Sopot where we were guests for a fine banquet. Even a band was there and played many selections including Yankee Doodle. 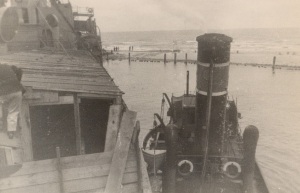 It took two tugboats to dislodge the William S. Halsted after running aground in the channel outside of Novy Port. Photo credit: Robert Ebey

December 11 – – – We weighed anchor and headed for Copenhagen, Denmark. As we were leaving the Polish ship channel leading to the Bay of Danzig, the Halsted ran aground. Two powerful tugboats were sent for and an hour later our ship was freed.

December 19 – – – ….our last day in Copenhagen and six of us took a train ride to a small town outside the big city. We visited a grade school and a cooperative farm. Now that the 6000 tons of coal are unloaded, we are heading for Sweden to take on a cargo of 4000 tons of paper pulp to be taken to Boston, Massachusetts. 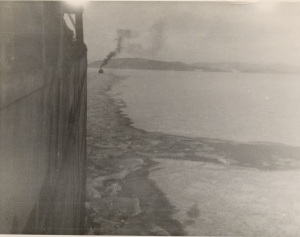 An icebreaker leads the way for the William S. Halsted into the Angerman River in Sweden. A ferry had just crossed the river creating another path across. Photo credit: Robert Ebey

December 23 – – – Arrived in Harnosand, Sweden, at the mouth of the Angerman River. We are about 300 miles south of the Arctic Circle. It is WINTER! As soon as an icebreaker arrived, we started up the Angerman River….About twenty miles upriver we reached the town of Waija. The paper pulp was brought to our ship on barges towed by tugboats….

December 24 – – – By noon the last of the 700 tons of paper pulp is in the holds and again the icebreaker leads us, this time down the river.

January 1 [1947] – – – We attend a New Year’s evening service in the Swedish Lutheran Church in Ljusne, a town about three miles from our ship….

January 3 – – – The ladies of the Ljusne Lutheran Church in our honor prepared a truly delicious evening meal. The children sang several carols in Swedish and we did so in English….

January 6 – – – Copenhagen Harbor again. We anchored for just a few hours to take on water, vegetables, fresh meat and milk.

January 7 – – – We are in the North Sea and are experiencing a very severe blizzard. Visibility is nearly zero. Our fog horn blows constantly at regular intervals. We just missed another tanker. We don’t need another experience like that. This is by far the roughest water of the trip. In spite of the one inch ledge all around our table the dishes crash to the floor time and time again. Ray Zook and Bob Ebey are again the only ones to escape seasickness. The ship rocks over so far we cannot sleep. We need to hang on to keep from rolling off our bunks.

January 17 – – – Another severe snow storm has made walking on deck very difficult and hazardous. Our captain has ordered us to walk back and forth only for meals.

January 19 – – – At last the ocean has calmed down. We can now be out on deck at any time. The bow is covered with thick ice.

January 24 – – – HOME AT LAST! Three and a half months away from home on a six weeks leave of absence.

Next post: The vessels used: Liberty and Victory ships converted into livestock carriers