If you guessed they were all seagoing cowboys, you are right! They were three of the nearly 7,000 adventurous souls who took time out of their lives to tend livestock sent on ships to Europe after World War II for the United Nations Relief and Rehabilitation Administration (UNRRA) and the Heifer Project.

Bob Richards was 19 and a pre-ministerial student at Bridgewater College when he responded to the first round of calls for men to serve as cattle attendants for UNRRA. He sailed on the second UNRRA livestock ship to depart – the SS Virginian, leaving Baltimore for Greece on June 26, 1945. 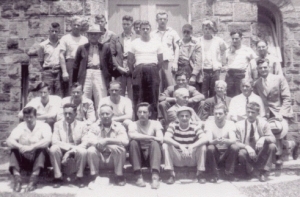 The seagoing cowboy crew of the SS Virginian gathered at the Baltimore Church of the Brethren. Photo courtesy of Jerry Lefever.

Richards served as assistant editor for a report made by the cattlemen of this trip titled “Relief for Greece.” The report says that he gave the message at the cowboy crew’s second Sunday worship service on board. His topic: “You are the Light of the World.” Richards went on to become a minister in the Church of the Brethren for a time and taught religion classes at LaVerne College in California, while at the same time keeping up his pole-vault training and winning gold medals in the 1952 and 1956 Olympics.

William Styron signed up as a seagoing cowboy on an impulse the summer of 1946, according to his biographer James L. W. West III in William Styron, A Life. After three years of college and a short U.S. Marine Corps stint at the end of World War II, Styron wanted a summer break. He was staying with his parents in Newport News, Virginia, and was looking for a way to pass the time while waiting to participate in the prestigious two-week Bread Loaf writer’s conference that August. “Perhaps, he thought, he might do some seafaring,” West writes. And seafaring he did! Aboard the SS Cedar Rapids Victory that left Newport News July 10, 1946, bound for Trieste, Italy.

A dock worker strike in Trieste gave Styron the gift of added time abroad. He later drew on his time there to write “A Moment in Trieste,” a sketch that was published in 1948 in American Vanguard, a collection of pieces by “young American authors on the verge of professional recognition” edited by Don M. Wolfe. Biographer West tells me in an email that “late in his career, William Styron thought about basing a novel on his Cedar Rapids voyage. It was to be a coming-of-age story in which the protagonist, with experience as a Marine in WWII, encountered new experiences….” Sadly for us, that novel never got written. Styron died in 2006.

That same summer, 17-year-old Harvey Cox of Malvern, Pennsylvania, was looking for adventure between his junior and senior years of high school. He found it on the SS Robert W. Hart. Cox devotes an entire chapter to this voyage in Just As I Am, his book about his faith journey. The Hart left Baltimore June 28, 1946, headed for Gdansk, Poland.

Harvey Cox is second from the right in the front row of this seagoing cowboy crew photo on the SS Robert W. Hart. Photo courtesy of Richard Musselman family.

A harrowing experience with a supervisor and a lacerating horse bite didn’t dampen Cox’s enthusiasm. He writes, “Everyday at sea I leaped out of bed when the bell rang at five; I was thousands of miles from Malvern; I was doing something important; I was becoming an adult.” Witnessing the vast devastation in Poland with its lingering acrid smells and seeing the war’s effects on the people, especially the children, made Cox more introspective on the way back across the Atlantic.

He writes, “As the long, empty days passed, I became aware of a conviction growing inside me that there could not be another war. It just was not worth it.” And he concludes, “A youthful adventure…had unexpectedly become a faith journey.” Cox went on to become a professor of theology at Harvard University and a peace activist.