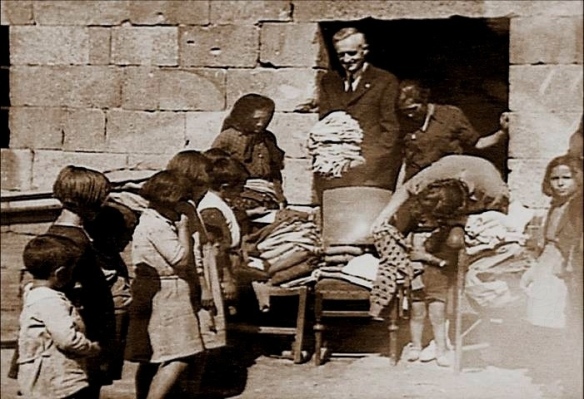 After witnessing children dying from a limited supply of powdered milk in Spain in 1937 and 1938 during the Spanish Civil War, Church of the Brethren leader Dan West came home promoting the idea of “a cow, not a cup.” At a meeting of the Church of the Brethren Northern Indiana District Men’s Work April 12, 1942, and with the prior blessing of the denomination’s Brethren Service Committee, Dan’s plan was accepted and set in motion.

As the project evolved, it went through a series of names:
– “Dan West’s Calf Project”
– “Cattle for Europe”
– “Heifers for the Low Countries”
– “European Cattle Project”
– “Dairy Cattle for Belgium”
It was finally officially termed “The Heifer Project” at the “Cattle Committee” meeting of December 16, 1942, and at the subsequent Brethren Service Committee’s final approval of the plan in January 1943.

The purpose of the “Cattle for Europe” plan Dan presented to the Northern Indiana Men’s Work in April 1942 was “to save children’s lives, and to help in rehabilitation.” The agencies to involve went beyond the Brethren Service Committee to include the Mennonite Central Committee, American Friends’ Service Committee, and “other non-partisan agencies wanting to help. No circumference,” Dan proposed, “will be drawn by us if the essential purposes fit.”

Dan’s outline of tasks for the Brethren Service Committee was well thought out and expansive, including:
– Appointment of a subcommittee to administer the project and encourage cooperation with other groups. (This became the Heifer Project Committee.)
– Plans to “[m]ake clear the trackage with Belgian, Dutch, and/or other governments for the efficient placing of heifers of suitable breeds as soon as [the WWII] blockade is lifted and shipping resources permit.”
– Securing cooperation of all USDA agencies.
– Creation of district committees “in at least 5 districts in at least 5 states: Indiana, Ohio, Pennsylvania, Maryland, and Virginia.”
– Securing of heifer calves and securing funds from willing donors.
– Earmarking heifers “BSC,” concentrating and shipping heifers to Atlantic ports at BSC expense, and shipping heifers to European ports at the expense of European recipient countries.
– Plans to “[s]end BSC and/or other responsible [persons] with every shipload to destination on European farms” and report on such.
– Contingency plans for disposal of cows, calves, and milk products “in case of delays because of war uncertainties.”

“I believe our church has the resources to furnish more than ¼ of this total number,” Dan noted. “How much of the motive we have remains to be seen.”

Next post: Dan West’s rationale for the Heifer Project

This post will be more personal than my normal posts. My husband Rex and I are currently nearing the end of a two-month stay at the Heifer Ranch in Perryville, Arkansas, where I’ve been sequestering myself to work on my book-in-progress about the first decade of the Heifer Project (today’s Heifer International) while Rex has been volunteering in the maintenance department. Quite by coincidence, and fortunately for me, the Heifer International Board of Directors and the Heifer Foundation Board held their meetings at the Ranch this week. The Heifer Board invited me to sit in on Monday, and I am filled with admiration for the incredible talent of Board members and staff alike, appreciation for the work that Heifer is doing both here and abroad, and anticipation of the wonderful things to come.

A highlight of the meeting for me was hearing Senior Vice President of Marketing Christy Moore tell of the marketing team’s visit to Honduras to see for themselves the impact of Heifer’s work there. Today, Heifer is so much more than just giving an animal to recipients, as it was in the beginning. It’s about building sustainable communities, achieving living incomes for community members through their small farms. At the dairy plant the team visited, Heifer has assisted a small business on the verge of closing by providing the owners with help in how to market the cheese they were making, teaching them good manufacturing practices, and providing capital for needed equipment. Heifer’s signature “Passing on the Gift®” value is achieved when the owners are able to pass on the knowledge of hygienic dairy practices to their small farm suppliers. The business has become so successful that families who had migrated to the United States for work are able to move back home because there are jobs for them there now, from the supply end to the marketing end of the cheese business.

In front of every Board member during the meetings, on the back of their name card, was Heifer’s mission statement. Another highlight for me was hearing of Heifer’s plans to expand their efforts in working at the last part of that statement: taking care of the earth. They already teach the sustainable methods of agriculture to small holder farmers in areas being affected by climate change, methods that help to reclaim, replenish, and protect the soil and water sources. The next step will be to partner with green investors to be able to expand this work to a scale that will help cool the planet.

The third highlight for me was to hear the Board begin their planning for a major global celebration of the organization’s 75th anniversary next year. It seems like only yesterday that we were celebrating the 70th! I’m looking forward to seeing what the planning committee comes up with this time around and to participating in whatever ways I’m asked and able.

The culminating highlight of the day for me was to share the evening stage with Heifer founder Dan West’s daughter in what was billed on the Board’s agenda as “An Evening with Jan Schrock and Peggy Miller,” or as Jan likes to call it, “The Jan and Peggy Show.” This is the fourth time we have presented together, with Jan sharing stories about her father and how he became Heifer’s founder and me sharing the history of Heifer’s beginnings, including stories of the seagoing cowboys and Heifer’s legacy. A bonus was having longtime Heifer Executive Director Thurl Metzger’s daughter Kathleen McNamee present to share about her father’s role in purchasing the Heifer Ranch. The Ranch staff created a very festive atmosphere in an outdoor pavilion and served a delicious meal using Ranch-raised meat and produce that set just the right tone for a delightful evening with the Board members, Heifer International’s Leadership Cabinet, and Heifer Ranch/Heifer USA staff and volunteers. A night to be long remembered. 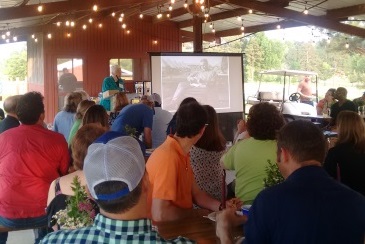 Jan West Schrock tells how her father’s service in World War I set him on a life-long path of working for peace. Photo credit: Peggy Reiff Miller.

It was an honor to share the history of Heifer’s beginnings with the people who carry on its legacy today. Photo credit: Rex Miller.

Next post: A tour of Heifer Ranch with the Heifer Foundation Board.