Seventy-five years ago, sixteen impoverished Puerto Rican families received the first gift of heifers donated by American farmers through the Heifer Project. This past Saturday, two historical developments of 1942 that led to these gifts were celebrated in the lush mountain town of Castañer, Puerto Rico. 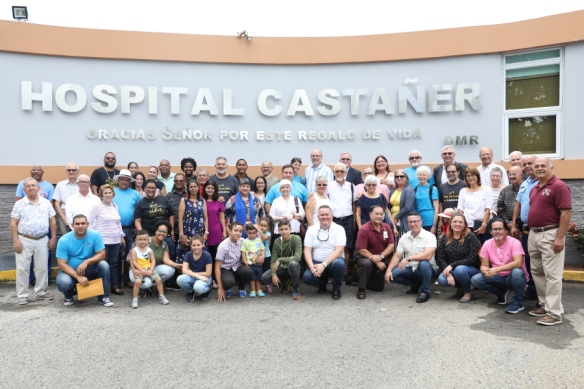 October 5, 2019. A tour of the modern Castañer Hospital and its new emergency room wing started the day’s festivities. Photo courtesy of the planning committee.

In July 1942, the Church of the Brethren Service Committee opened Civilian Public Service Camp #43 in Adjuntas, Puerto Rico, as part of the alternative service program established through the U.S. government for conscientious objectors during World War II. The first sub-unit of CPS Camp #43 was set up in Castañer to serve this thickly populated mountainous area in dire need of medical services. The CPS men assigned there built a small hospital out of a barrack structure and provided other social services.

The remains of the original Hospital Castañer.

After the war, the Brethren Service Committee continued the work there, including the formation of a Church of the Brethren congregation (Iglesia de los Hermanos). The hospital and congregation have both survived and thrived, exemplifying the meaning of community in its deepest sense.

1942 also marks the beginning of the Heifer Project, when Dan West’s idea of sending cows to people devastated by the Spanish Civil War was put into motion as a program of the Brethren Service Committee. With many heifers ready to ship by the end of 1943, shipping across the Atlantic was impossible with World War II underway. Already at work in Puerto Rico, the BSC chose this poverty-stricken island as the alternate destination for the first Heifer Project shipment.

CPS Camp #43 Director Rufus King worked closely with the Farm Security Administration in Puerto Rico to make arrangements. Sixteen heifers arrived in San Juan via ship July 22, 1944. They were distributed by the FSA in municipalities near San Juan to needy recipients who could support a cow. The cows offered many children in these families their first taste of milk.

The next year, on May 25, 1945, a larger shipment of 50 heifers arrived in San Juan. From this shipment, six heifers and one bull were allotted to the CPS Camp #43 sub-unit in Castañer. The heifers provided milk for the hospital and CPS workers and served as a demonstration dairy project for the resettled small farmers in the area. The bull served to improve the dairy stock of the surrounding communities.

A portion of Medford Neher’s mural depicting the history of Hospital Castañer highlights the Heifer Project shipment to Castañer of 1945.

At Saturday’s Heifer International celebration event, a roadside marker was placed near the old hospital to commemorate the site where the barn for this small dairy herd had been located. 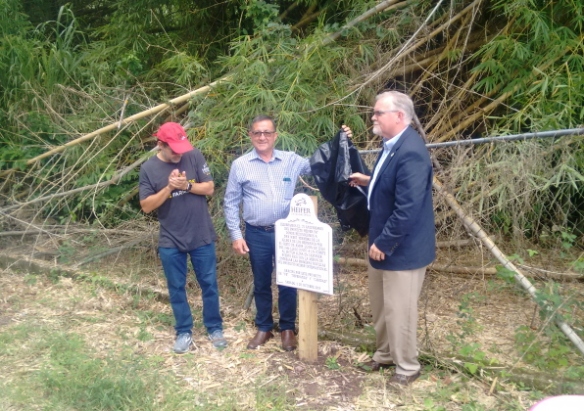 In an afternoon celebration in the town square, two special gifts brought the 1942 developments of CPS Unit #43 and the Heifer Project full circle. General Secretary David Steele presented a check from the Church of the Brethren for $100,000 for the Castañer Hospital to the hospital’s Executive Director Domingo Monroig.

And in honor of Heifer International’s practice of “passing on the gift,” Steele and Heifer International Vice President Jesús Pizarro presented a bull calf to local high school agriculture student Erick Yadiel Rivera to give him a hand up in his aspirations of developing a dairy herd. 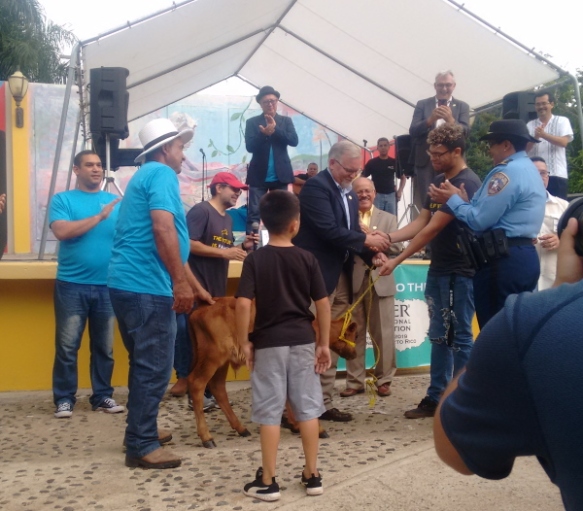 The celebration ended roundly for me on Sunday morning when I had the opportunity to meet a Heifer Project recipient at the Castañer church.

Yours truly with heifer recipient María Quiles Pérez and Jay Wittmeyer, Executive Director of Global Mission and Service for the Church of the Brethren and Board Member of Heifer International.

María Quiles Pérez was a young girl at the time her father, Benito Gonzalez Rivera, was granted a heifer. They lived in the Guyao sector of Adjuntas near Castañer. Gonzalez Rivera would have been one of the small farmers selected either by the Puerto Rico Reconstruction Administration or the Farm Security Administration to receive an animal. María recalls that they paid $3.00 a month for their heifer. This payment would have been through a loan from the FSA or PRRA to cover transportation costs and other expenses for the animal. For the first shipment, and likely the second, the total came to about $75.00 per heifer.

“Raising a family was hard at that time,” María says. “Our heifer was a gift from God.”