At age sixteen and between his junior and senior years of high school, Harry Badorf, Jr., and six of his friends made the trip of a life time. Harry’s Sunday School class at the Lititz [PA] Church of the Brethren was raising money to buy a heifer for the Heifer Project. Having heard the stories of others who had accompanied livestock to Europe for the United Nations Relief and Rehabilitation Administration, these boys decided to go the next step and sign up to be seagoing cowboys. They ended up on UNRRA’s S.S. Cyrus W. Field carrying a load of 330 Heifer Project animals to Naples, Italy.

The ship departed from Baltimore, Maryland, in the wee hours of June 14, 1946. The light work of caring for heifers on the smooth seventeen-day crossing of the Atlantic Ocean afforded countless hours for playing cards and laying in the sun. “When we came back,” recalls Dick Nolt, “we didn’t look like we were white boys.”

On arrival in Naples on July 1, Badorf notes in his diary, “From where our ship is docked we can see Mt. Vesuvius and the Governor’s Palace. There are several wrecked and sunken ships in the harbor. Some parts of the city are bombed up fairly bad. . . .It is very hot and the flies are awful.”

Heat and flies notwithstanding, Badorf and his friends took advantage of the nine-day stay of the Cyrus W. Field in port. First, an UNRRA truck took the cowboys to see the farm about 40 miles outside Naples where the heifers would temporarily be held before distribution to selected farmers and institutions. The next day, UNRRA took the cowboy crew on a tour of Pompeii.

Art restoration in process at the excavation of Pompeii, July 1946. Photo courtesy of Stanley Schoenberger.

A brother of two of the Lititz cowboys who was serving in the U.S. Army in Italy arranged for a military “cracker box ambulance” to take the group to Rome. Eleven cowboys and four of the ship’s crew who were Catholic and wanted to see the Pope packed themselves into the vehicle for a bouncy trip north. “It was worth it,” says cowboy Jean DePerrot.

Taking a break from the “cracker box ambulance” on the way to Rome, July 4, 1946. Photo courtesy of Stanley Schoenberger.

The group toured the Coliseum, walked through the Roman Forum, went to the top of the dome at St. Peter’s Cathedral, and took in Michelangelo’s frescoes in the Sistine Chapel. Badorf notes seeing “millions of dollars worth of pearls, rubies, gold and silver” at the Vatican Museum. But the Pope was nowhere to be seen.

The Lititz cowboys at the Roman Forum, July 1946. Photo courtesy of Stanley Schoenberger.

With the help of army brother Stan Dietrich and the cowboys’ Merchant Marine cards, they were able to stay overnight in Rome at a U.S. Army Rest Center located in a complex of elaborate marble buildings built by Mussolini. There they got to swim in Mussolini’s swimming pool. 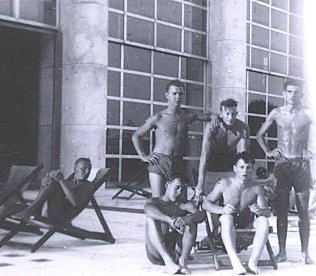 A sobering stop to see the immense World War II destruction at the Monte Cassino Monestery on their return to Naples capped off their two-day excursion.

The next day, the Lititz boys took a limo up Mount Vesuvius, still warm from it’s 1944 eruption, They saw the bubbling lava and walked ankle-deep in its ashes. Then it was on to the Island of Capri. The crew hired a motor boat to take them around the island and into its Blue, Green, and White Grottoes. They got a hotel room for 150 lira each. The next morning they took a taxi up hairpin bends to explore Anacapri and its Villa San Michele and the Church of Saint Michael with its mosaic floor depicting the Garden of Eden. They returned to Naples in time to see a stirring production of Carmen at the open air San Carlo Opera House.

Their last day of adventure took in the breathtaking sights along the famed Salerno Amalfi Drive, followed by a return to Mount Vesuvius. “It took us about an hour and a half to hike up,” notes Badorf, “and we ran down in about 15 mintues.”

I had a delightful interview with four of the Lititz men several years ago in which they all agreed, “We learned more in those nine days than in any history or geography class in school.”