The cowboys on the S. S. Rock Springs Victory, tending a shipment of animals for Ethiopia in March 1947, had many unique experiences. One of those bearing note this Easter weekend I’ve already posted, about their Easter Sunday communion service on the Red Sea. Today, I’ll share a story from my interview of July 2006 with cowboy Howard Lord, 22-year-old farmer from Iowa who later went into the ministry. I had asked Howard what he remembered about life on the ship.

“I remember so vividly,” he says and laughs. “Because we had 30 head of wool sheep, and 30 head of Karakul. They’re a sheep that they kill and skin. And they have alpaca-type fur, real kinky fur. It’s not wooly, it’s kinky.

“The first day out, [our supervisor] said, ‘We gotta shear these sheep. It’ll be summer when they get to Ethiopia.’ They started asking, ‘Who shears sheep?’ Course nobody!

“We had two foremen, Norman Barthell and Carl Geisler. They were both older than I, so they said, ‘We have to shear these sheep.’ So they started. Then they said, ‘We, we have to be on our jobs as foremen for these cattle we have on the ship. Lord, you grew up on a farm.’ ‘Yeah,’ I said. ‘You shear sheep.’ I said, ‘No. I’ve seen ’em sheared, but I’ve never sheared them.’ ‘Well, would you care to try?’ I hesitated and said, ‘I’ll try it. And they handed me a pair of hand clippers. Hand clippers! 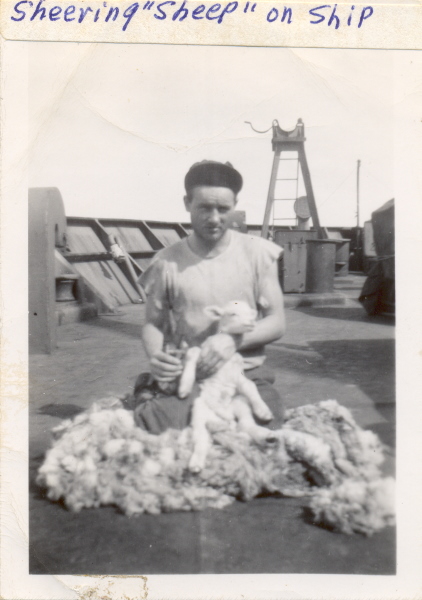 “They finally talked the young kid from Ohio, Bob Heimberger, into helping me. He did very well. We got [the wool sheep] sheared by the time we got to [our first stop in] Greece. And then they said, ‘We gotta shear the Karakuls.’ And I said, ‘You don’t shear Karakuls. They skin Karakuls! They use the hides.’ ‘Well, you have to shear them. They’ll never stand it in Ethiopia.’ 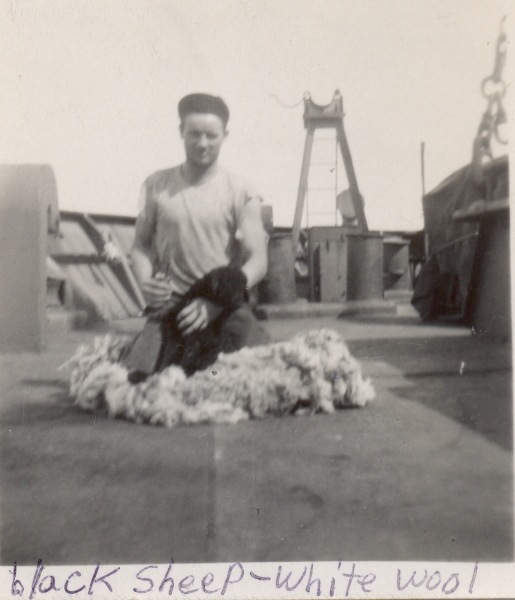 Howard Lord with a sheared Karakul. A high percentage of Karakul sheep are born black. Photo courtesy of Howard Lord.

“As soon as you take the shears to the Karakul, you could hear the sand grit. So we would sharpen the shears three, or four, or five times every time we sheared a sheep. And they were small sheep. They were just full of grit. It was that kind of kinky skin….We got them sheared by the time we got to Ethiopia.”

Shear madness? Perhaps not. Research shows that an adult Karakul‘s wool, as well as its younger wooly hide, was highly prized. A courser wool, it was “felted or spun into fabric for garments, footwear, carpets, and yurts, among other uses.”

Next post: more tales from the Rock Springs Victory trip to Ethiopia