The trip across the Atlantic was much the same in 1921 as in 1946 – seasickness, smelly holds, ocean vistas and all. The animals demanded the same attention for feed and water. However, the 1921 shipments contained a greater percentage of cows needing to be milked, with some cowboys responsible for as many as 60 head. Must have been some sore hands on those ships! The milk was dumped overboard.

The differences in the two eras manifested when the ships docked in Bremen. With little damage to structures by World War I artillery, the cowboys of 1921 found an exciting city still intact, with one crew heading into town for beer and to refresh their work-encrusted bodies in a public bath house. The cowboys after World War II could only step into the rubble left from saturation bombing and had no such pleasures.

Being of German-speaking heritage and delivering dairy animals sent by ethnic Germans, the 1921 cowboys were met on board in Bremen by a welcoming committee and taken on tours through Bremen and around the country. They visited poet Goethe’s home in Weimar, banqueted with city council members in Leipzig, visited an orphanage in Halle where some of the cows were sent, and marveled at palaces and museums in Berlin. The UNRRA cowboys had no welcoming committees. The livestock they delivered were sent via rail on to Czechoslovakia, as Germany was not a receiving country for UNRRA goods. These cowboys made their way around the ruins of Bremen on their own, and that was as far as most of them got.

Devastation as far as the eye could see met the UNRRA seagoing cowboys in Bremen, Germany, in July 1946. Photo by Roger Ingold.

Living like kings ceased for the 1921 cowboys when they returned to their ship, however. “If the Germans looked on with warm hearts,” writes La Vern J. Rippley, “the West Arrow’s Captain Forward cast a less friendly eye.” At his command, the cowboys spent 13 days of their return voyage “pitching manure, scraping stalls and washing down the interior of the ship.” No matter that the work wasn’t in their contract.

Even though the cowboys of 1921 had not seen the brutal devastation witnessed by the UNRRA cowboys of later years, like the UNRRA cowboys, they came home realizing the reality of war. Cowboy Peter Andres commented in a New York Times article of February 25, 1921, “There is too much misery here.” Others noted, “We have had plenty to eat and have been banqueted everywhere but everywhere we have seen hungry children and tubercular adults who need milk.”

The human face of war is timeless.

In my last post, we saw how the churches of German-speaking settlers in the United States rallied to send two shipments of cattle to Germany after World War I. The third shipment ran into resistance reminiscent of the Wild West.

The cows were gathered in South Dakota, mostly by Missouri Synod Lutherans of Russian-German heritage. The night of Wednesday, March 23, 1921, some 300 of the 700 donated cows were being held in Scotland, South Dakota, for train transport to Chicago and then on to Baltimore. La Vern Rippley reports that four men were watching over the cattle “when nearly twenty-five automobiles packed with ruffians and thirty men on horseback arrived and began shooting in the air to stampede the cows. Several cows were killed and some wounded, mostly when they were hit by automobiles.”

Donors of the animals helped round them up. By the next afternoon, all but twenty were gathered. Local authorities refused assistance and ordered the cattle out of the county. A cattle drive ensued, and the cows were corralled at a farm across the county line in Hutchinson County where the authorities were more cooperative. The county sheriff deputized Ewald Gall of Menno who was put in charge of a large posse of farmers, deputized and armed with shotguns and rifles, to protect the cows.

About 10:30 p.m. Holy Thursday evening, March 24, about thirty automobiles, coming north from Scotland, approached the holding farm. The Scotland Journal of March 31, 1921, reports that the attackers were members of the American Legion. Upon discovering “they were outnumbered four to one, both in men and guns,” they called off the action and departed.

On Good Friday, March 25, the cows were driven on to Tripp to join the remainder of the 700 cows being held for loading on the train to Chicago. Anticipating further trouble, another posse was arranged by county and state officers. The Springfield Times of March 31, 1921, reported, “The guard was again used Friday night and while considerable rag chewing was indulged in by the deputies and onlookers who had gathered from nearby towns, there to see the fun or to make hostile demonstrations, no one was hurt. We understand that several parties from Bon Homme county were placed under arrest by the sheriff and spent the night in the Tripp calaboose.”

The cows were put on board the train the next morning, but their troubles were not over. American Legionnaires turned to legal attempts all along the way to stop the shipment, but to no avail. The last attempt was in Baltimore where the cows were being held for arrival of their ship, the West Arrow. La Vern Rippley reports, “the American Legion in that city called the donation into question. Stumped as to what action they could take against this form of export, they voiced the opinion that there was something decidedly wrong with supplying the Germans while the same need existed in so many of the countries that had been devastated by that country’s armies. Surely, they argued, the children of France, Italy and Belgium were as deprived as the German children.” The West Arrow departed safely April 15, arriving in Bremen, Germany, on May 1.

My next 2nd Friday post will compare the experience of seagoing cowboys on this 1921 shipment to Germany with those of 1946.

The term “seagoing cowboy” was coined at the start of UNRRA’s livestock shipments in June 1945; but the men who carried this title weren’t the first to tend livestock on the oceans. Bob Zigler, Heifer Project’s seagoing cowboy office manager in 1946, wrote:

It seems that livestock has been transported on a commercial basis since man began to tame animals and graze them in herds. For years cattle boats have been the ‘poor man’s taxi’ to adventure and foreign lands. By choice or necessity many have used this means to make their way over the sea lanes of the world.

Of the thousands who have sailed probably the best known was the late Will Rogers. Will, as youth, had left his home in the Indian Territory for Argentina and the great cattle ranches of the pampas. But several months passed by in an unsuccessful effort for fame and fortune and the future was not promising. So he signed aboard the SS Kelvinside bound for Durban, South Africa with a load of livestock. And a load it was for on board were 500 head of cattle, 700 hard tail mules, 400 horses, and on a specially built deck, a flock of sheep.* Truly a floating menagerie. The trip from Buenos Aries lasted 25 days and as it has been for many since that time, it was 25 eons of relentless agony. The year was 1902.

Then came the crisis and agony of World War I, leaving millions of hungry people across Europe in its wake. The Germans suffered not only from war damage, but also from the reparations required of them in the Versailles Treaty to deliver 800,000 milk cows to the Allied countries from an already dwindled herd. With a low supply of milk, death rates from tuberculosis and infant mortality had doubled since before the war. And German-American Missouri Synod Lutheran and Mennonite church leaders and farmers in the Midwest responded to the need.

In 1920 and 1921, four shipments of cows and heifers were assembled, of which three were delivered, through the work of the American Dairy Cattle Company in Chicago. The first shipment arrived in Hamburg, Germany, November 12, 1920. The 700 Holstein cows were held in quarantine until the cattle company received assurance that the animals would not be sent out of Germany as reparations.

Mennonite historian Raymond F. Wiebe of Hillsboro, Kansas, notes the second shipment of cows and heifers were donated by Lutheran Church Missouri Synod and Mennonite families of Kansas, Oklahoma, and Texas. Applications for “cattle tenders (cow milkers)” were solicited by the committee involved. One of those cattle tenders was Peter C. Andres who accompanied the Kansas cows to Texas. He wrote home from Texas City that ten vigorous youths from Hillsboro had joined him. To this Kansas farm boy, the size and construction of his ship, the S. S. West Arrow, was both impressive and frightening; but his confidence grew as he became familiar with the ship.

The West Arrow arrived in Bremen, Germany, February 7, 1921, with 732 cows, 40 newborn calves, and 30 cattle tenders who were met on board by a grateful welcoming committee of prominent German citizens. The American Friends Service Committee and the German Red Cross allocated and delivered the animals to orphanages and nursing homes, while the German Red Cross treated the young Americans to a two-week tour around the country. The American Dairy Cattle Company had requested the German Red Cross to provide this tour so the young men could see the dire need in the country and report on the conditions there when they got home, encouraging more people to donate more cows.

After the tour, half of the cattle tenders traveled on to Berlin for a reception. Photo provided by Raymond F. Wiebe. 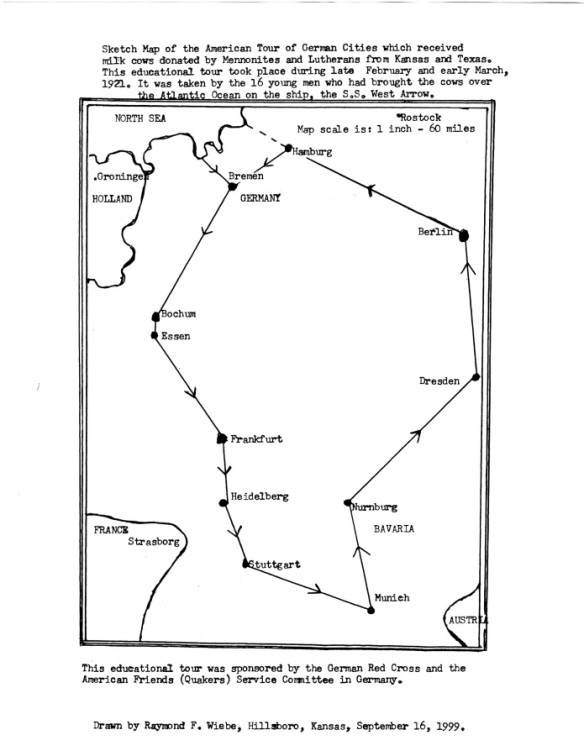 In the meantime, in South Dakota, another drive was on to solicit cows for a third shipment, but it was not smooth sailing for those involved. (coming in next post)

*I’m not certain where Bob Zigler got this information, but I question whether that many animals would fit on a ship back then. The Victory ships built at the end of World War II could only hold around 800 large animals along with their provisions. It wasn’t until the S. S. Mount Whitney was built in 1945 that 1500 animals could be transported at one time. I haven’t been able to find information on the S. S. Kelvinside to confirm its capacity.