UNRRA made its last livestock shipment from the U.S. in April 1947, delivering another load of heifers to China on the S. S. Lindenwood Victory. On its way home later that month, the Lindenwood was the only ship to be sighted by the three Heifer Project seagoing cowboys of the S. S. Alfred DuPont on their way to Japan – a symbolic passing of the torch from UNRRA to the Heifer Project. The Alfred DuPont carried the precious cargo of 25 purebred Holstein bulls, a gift from the Heifer Project to help Japan rebuild its dairy industry after World War II. This first shipment of the Heifer Project after UNRRA’s disbanding was also a deliberate symbol of peace and goodwill to a country with which the U. S. had been fighting only months earlier. 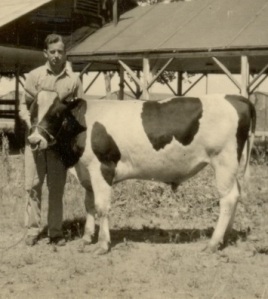 The job of selecting the bulls fell to Norman Hostetler, a young Brethren man trained in animal husbandry who had been a cowboy supervisor for UNRRA on two trips to Poland and worked in the cowboy office in Newport News, Virginia. “Not a single farmer approached for the purchase of these bulls was averse to sending cattle to Japan,” Hostetler said. After an exhausting round of visits to breeders in California, Hostetler and two fellow seagoing cowboys boarded the Alfred DuPont along with their charges at Pier 90 in San Francisco.

“Our voyage of 21 days was extremely rough,” notes Hostetler. “Waves were washing over the decks frequently and on several occasions the cattle stalls were damaged somewhat. It was remarkable to me that the bulls came through it all in excellent condition.” The rigors of the trip were to be rewarded, however. 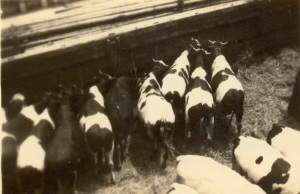 Bulls in the barge that took them to shore in Yokohama, Japan. Photo: Norman Hostetler.

“We three kings of Orient are, and I’m not fooling!” notes cowboy Martin Strate in a letter to the Heifer Project Committee. “Since our arrival May 9, things have been happening! The bulls were unloaded and taken by barge to the Quarantine station by noon of the first day. The press was present en-masse.”

“There were at least fifteen photographers there including the Japanese as well as the Army and the Associated Press,” says Hostetler. The trip had been approved and arranged through SCAP, the Supreme Commander for the Allied Powers which controlled Japan after World War II, and transportation was provided by the U. S. War Department. “Army officials told us that our shipment was the most important one to have entered Japan since the war, insofar as the Japanese are concerned,” Hostetler says. “Then when they learn that the animals are a gift of the Christians of America, they are overwhelmed. They can scarcely imagine a gift of 25 bulls, the value of one being about 30,000 yen.” 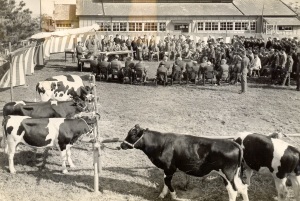 The Ceremony of the Bulls, Yokahama, Japan, May 19, 1947. Photo courtesy of Norman Hostetler.

On May 19, 1947, seventy years ago this month, the Japanese Ministry of Agriculture and Forestry staged an official reception for the bulls. “The presentation ceremony was held in the grounds of the quarantine station, with about 100-150 people there,” notes cowboy Charles Frantz. “The sun danced royally on the red-and-white striped banners. There were half a dozen photographers present, and the occasion and hospitality really outdid itself for us Occidentals. Tea, beer, soda water, peanuts, fruit, meat, and flowers followed the ceremony.” 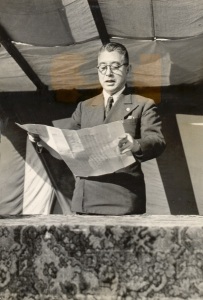 A Japanese official formally presents his appreciation to the Heifer Project. Photo courtesy of Norman Hostetler.

Norman Hostetler addressed the gathering on behalf of the Heifer Project, as did Lt. Col. J. H. Boulware on behalf of SCAP. Several Japanese dignitaries gave speeches of thanks for the bulls, which were to be distributed to livestock experimental stations and breeding farms throughout the country. And the seagoing cowboys were presented with gifts. Hostetler recalls receiving a bolt of silk from which his future wife made her wedding dress. “We’ll never forget the occasion,” says Frantz.

Nor would many of the Japanese of the day. The cowboys were able to travel to 16 of the livestock stations to which the bulls were taken and treated royally at all but one. Strate reports that at a meeting in Tokyo, “We were most graciously thanked by a gentleman well over eighty years of age. He stood erect and said something like, ‘I stand because I am over eighty years old. In my eighty years, I have never before witnessed such genuine Christian generosity. This gift to the Japanese people will long be remembered because it is the first of its kind and that it came soon after the war.” 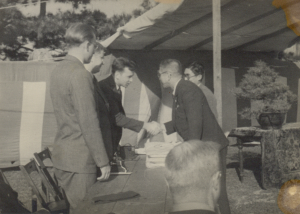 One of the speeches. 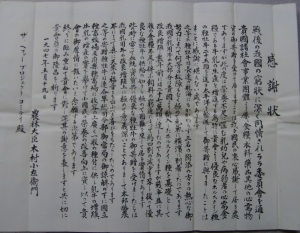 Copies of all speeches were presented to the cowboys to deliver to the Heifer Project. Photo: Peggy Reiff Miller, courtesy of Heifer International.

Hostetler, Strate, and Frantz inspected the bulls at the agricultural stations to which they were taken. Photo courtesy of Norman Hostetler. 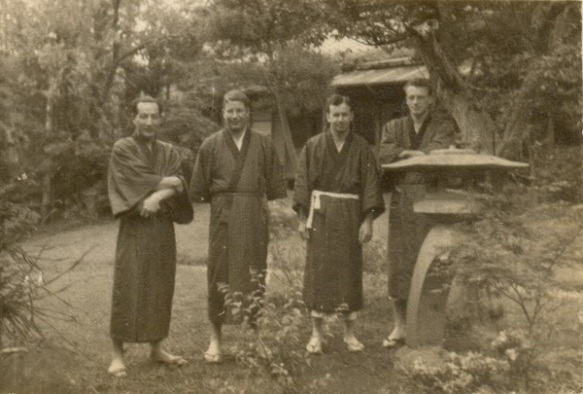 The seagoing cowboys were treated to Japanese hospitality and culture on their tour. Photo courtesy of Norman Hostetler.