The Heifer Project and the Seagoing Cowboys once again take the stage at the Oberschlesiches Landesmuseum in Ratingen, Germany. 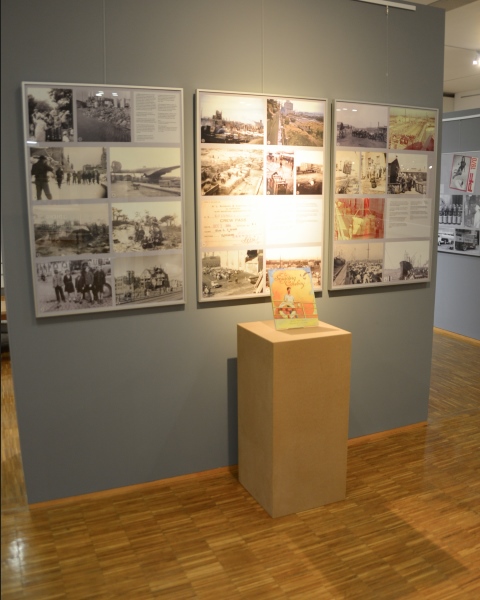 A piece of the 2016 exhibit is now on display through February 18, 2018, in conjunction with a larger exhibition at the Haus des Deutschen Ostens museum in Munich. Titled “Kann Spuren von Heimat enthalten,” the exhibition focuses on historically traditional German food and drink and its role in the identity and integration of Eastern European Germans as they settled back into Germany after their expulsion from their Eastern European homes at the end of World War II, as well as during the Cold War. The title is a wonderful play on words described to me by museum curator Melanie Mehring, meaning literally, “May contain traces of home.” It references “the typical phrase used on lots of food for people with allergies.” For example, “May contain traces of nuts.”

If you’re in Germany in the next couple of months, drop in and take a look!

Last week, my desire to visit a museum exhibition in Germany to which I had contributed came to fruition. And what a wonderful visit it was!

Off the beaten tourist path, in the northwestern German state of North Rhine-Westfalia (NRW), is a lovely museum that lifts up the history of the Upper Silesian people, a people with a strong tie to this region. When King Frederick the Great took control of Silesia in the 1700s, an area that includes a piece of northern Czech Republic and southern Poland, he invited coal miners from the NRW area to come and help develop the rich resources of Silesia. Much cross fertilization took place between these two areas. So when Silesians of German heritage were forced from their homes following World War II, it was to the NRW that many of them fled. Some thirty years later, many of these Upper Silesians began to pool together documents and artifacts of their history, and the Oberschlesiches Landesmuseum, now run by the NRW state, is the result.

Since December 6, 2015, the museum has been featuring an exhibition titled “For Body and Soul: the Culture of Food and Drink.” The museum ends with a display focusing on “Food in Times of Crisis,” and it is to this portion of the exhibition that I have contributed materials. When the exhibit was extended to February 19 of this year, I grabbed the opportunity to travel to Germany and see it for myself. 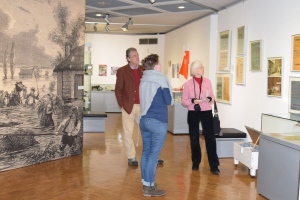 As with most of Europe, Upper Silesia bore the impact of World War II. With the loss of farm animals and crops, feeding the populace became a challenge. The United Nations Relief and Rehabilitation Administration came to the aid of Czechoslovakia and Poland, delivering not only livestock, but staple goods, as well. Two of the UNRRA shipments to Czechoslovakia included Heifer Project animals to be given to the neediest of farmers, and some of these animals were placed in Silesia. When the museum curator did an internet search on “UNRRA,” she found my website and contacted me to see if I might have materials to share with them. I pulled together what I had, and Heifer International gave permission for the use of some of their materials, as well. What a joy to see the beautifully assembled display in person!

Michael Ullrich reads the letter of thanks from the Gallus family of Silesia for their heifer from the Heifer Project. Photo: Peggy Reiff Miller

The exhibit features the loading of the animals in the United States, the care of the animals by the seagoing cowboys on the journey across the Atlantic, and the arrival of the seagoing cowboys in the devastated port cities of Nowy Port, Poland, and Bremen, Germany. From Bremen, the animals were shipped overland to Czechoslovakia and distributed to farmers selected by local committees. A thank you letter from a Silesian family who lost all their buildings and animals highlights the significance of these gifts of heifers. The letter ends:

Dear friends from America, we thank you for all you have done and still want to do for us in our war-torn Silesia. Especially, my family and I thank you for the rich gift of my only heifer, which brings us great joy. You have done a good deed that not only we, but also our children, will long hold in our memory.

Accompanying me to the museum was Michael Ullrich of Bremen, Germany, whom Heifer International has contracted to write a booklet about the shipments of the Heifer Project to Germany in the 1950s. The heifers were given mainly to people of farm background who had been expelled from Eastern European countries after the war. Mr. Ullrich is interviewing as many of them as he can find, and I’m looking forward to his book! Many resettled Silesians were among the Heifer Project recipients, some of whom I met and interviewed in 2013. This museum visit brought the story full circle for me – “food for body and soul” for me, as well.

Melanie Mehring and Eliska Hegenscheidt-Nozdrovicka gave me a delightful tour around Düsseldorf, capital of NRW, on my arrival. Photo: Peggy Reiff Miller

Immense thanks to the two lovely young women who facilitated our visit: museum education director Eliska Hegenscheidt-Nozdrovicka and museum curator Melanie Mehring! Your passion for your work shines through! May we meet again!

The Upper Silesian Museum (Oberschlesisches Landesmuseum) in Ratingen, Germany, has been displaying an exhibit on the seagoing cowboys since December 2015 as part of their “Food for Body and Soul” exhibit (see post of December 11). As a result, many people in Germany are learning about the seagoing cowboys and the Heifer Project, including German children who participated in a special program this summer using my picture book, The Seagoing Cowboy. Eliska Hegenscheidt-Nozdrovicka, the museum’s education director, has sent me some delightful photos from their summer experience that I share with you here. I’m happy to say that the exhibit, originally scheduled to run through mid-October, has been extended into February next year.

My book The Seagoing Cowboy on display at the museum.

The children are introduced to the topic “Nourishment in times of crisis.”

Eliska tells the story of the seagoing cowboys with the help of my book.

Looking up the travelling route from Baltimore to Gdansk with the kids. 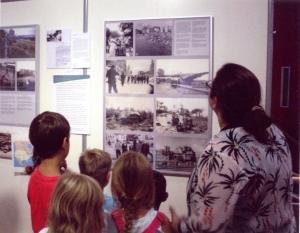 Reconstructing the story through historical photos. 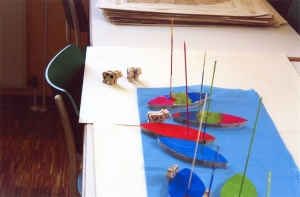 The children make their own ships to transport their heifers.

The ships take off from Baltimore…

including a shipping mishap. 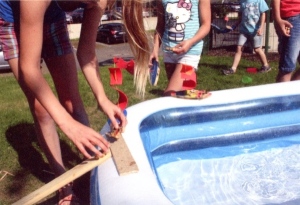 The ships dock in Gdansk.

And the heifers are offloaded. All is well.

What a delightful program. Wish I could have been there! Thanks Eliska for sharing this experience with me and allowing me to share it with my readers.

I’d be happy to know how others are using the book. 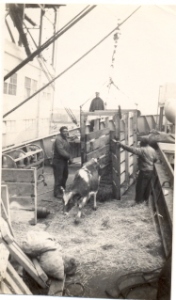 A heifer comes on board the S.S. Charles W. Wooster in January 1946 to begin its journey to Czechoslovakia. Photo credit: Christian Kennel.

January 7, 1946, the S.S. Charles W. Wooster, left Baltimore, Maryland, with 325 heifers on board. The cattle were on their way to help families in Czechoslovakia recover from the trauma of World War II. 175 of the heifers were gifts of American Christians sent by the Heifer Project for the neediest farmers in Upper Silesia. The remainder were sent by the United Nations Relief and Rehabilitation Administration which made numerous shipments of horses and heifers to Czechoslovakia and Poland in 1945 to 1947.

The S.S. Charles W. Wooster docked in Bremen, Germany, to offload heifers to be sent to Czechoslovakia in January 1946. Photo credit: Christian Kennel.

This week, in Ratingen, Germany, the Upper Silesia Museum (Oberschlesisches Landesmuseum) has opened an exhibit, “For Body and Soul: from the culture of food and drink,” in which this history is remembered. One of the topics covered in the exhibition is strategies of providing nourishment in times of shortage and crisis, and it’s in that context that the seagoing cowboys and the Heifer Project are being introduced to museum goers. It has been my pleasure and privilege to provide the museum with the images to tell this piece of their history. 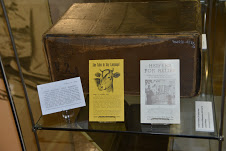 The exhibit runs through October 15, 2016, so if you’re in Germany between now and then, stop in and take a look! 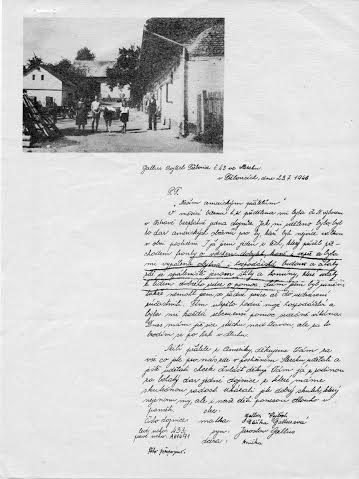 A recipient expresses thanks for their heifer. Courtesy of Heifer International. 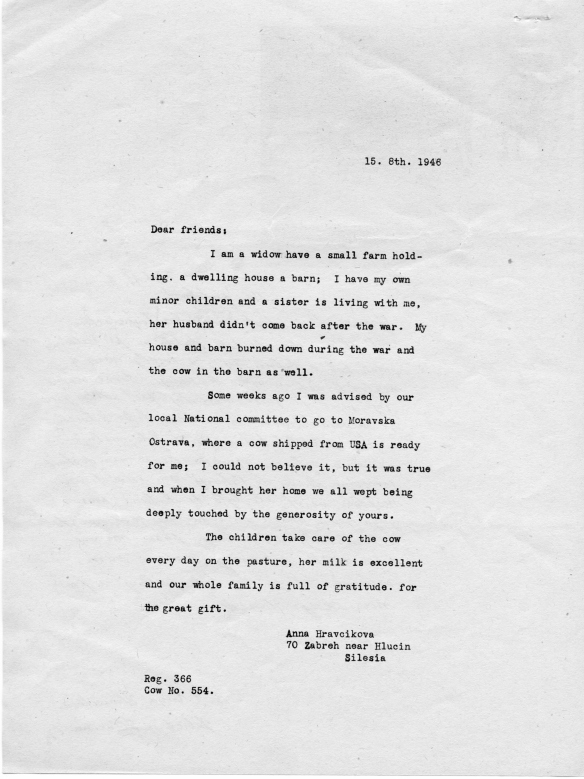 At this time of Thanksgiving, I have much to be thankful for as relates to my work:

First of all, I’m thankful for a supportive husband and family who give me the space and the grace to follow my passion of telling the seagoing cowboy story.

I’m grateful for the tremendous team at Brethren Press who have been hard at work with me to create our upcoming picture book The Seagoing Cowboy to be released in March. Illustrations by Claire Ewart bring the story to life in a “beautifully vivid” way, to quote my publisher, Wendy McFadden. Watch for the “cover reveal” soon.

I’m thankful for and excited about the increasing interest overseas in the seagoing cowboy and Heifer Project stories. I’m working with the Oberschlesisches Landesmuseum in Ratingen, Germany, on an upcoming exhibit that will include a display of the seagoing cowboys and Heifer Project shipments to Silesia after World War II. I’ll share more about that at a later date. And I’m working with Jouko Moisala from Finland on a display related to a famous shipwreck in December 1947 off the coast there involving one of the livestock ships, the SS Park Victory, after it ceased to be used for animals. There will be a 70th anniversary commemoration of this shipwreck in 2017 in which the history of this ship will be displayed. So many good things happening!

And most of all, I’m especially thankful for the many seagoing cowboys who have so graciously shared their stories, their photos, their diaries, and other materials with me. Their stories have been compelling enough to keep me busy for nearly fourteen years now. And what they have given to me enables me to share this fascinating history with the world. They carry a great legacy which is summed up in these lines from a 1946 ad in the Ephrata Review:

Men of good moral and ethical ideals who will conduct themselves in a manner which will be a tribute to their country and the program of which they are a part will be welcomed and respected by the people of Europe. It is felt that by learning to know these people and understanding their problems that the “cowboys” will become more valuable citizens to the country and the world.

And so they have.

The Heifer Foundation has set up a Cowboy Endowment that will help to support the work of Heifer International and honor the seagoing cowboys in the process. I invite you to join me in giving thanks for the service of these men by making today a day of “Thanks” and “Giving.” Learn more here.

Happy Thanksgiving to all!