Today’s post picks up the story of Heifer Project shipments to Germany in the 1950s through the eyes of Heifer Project Representative Joe Dell who was stationed there. In my previous post, Dell had taken seagoing cowboy Rev. A. H. Elshoff to the distribution of the 8th shipment in Coesfeld. The remainder of the heifers from that shipment had been distributed on June 29, 1950, to forty-two families in the Reichswald settlement. In his August 1950 report, “Reichswald Pioneers,” Joe Dell tells their story:

In a number of rather isolated rural areas in Germany today pioneers are clearing the timber land and breaking the soil in ventures reminiscent of days when pioneers in our own land forged westward in search of new lands and new homes. 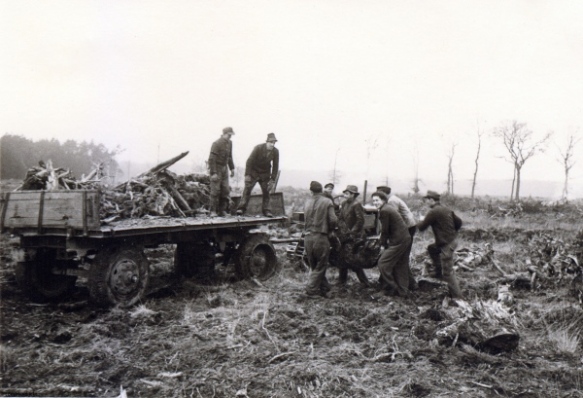 Clearing the land in the war-damaged part of the Reichswald, circa 1949. Photo courtesy of Heimatvereins Reichswalde.

These are refugee families who have been forced by the ravages of war to find new homes and new places to earn their livelihood. In western Germany today there are an estimated 9 to 13 million of these people. . . . For the past five years they have been waiting out a dreary and often hopeless existence in refugee camps . . . Or have been living with friends or relatives and struggling to support themselves as best they could by obtaining work from day to day. 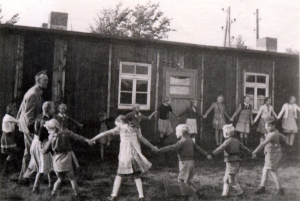 The makeshift school in a barrack until a new one can be constructed, 1950. Photo courtesy of Heimatvereins Reichswalde.

But let us look a little more closely in order that these people may become known to us. In the westernmost part of Germany, a few miles from the Holland border, lies the Reichswald or German forest. Here more than 1100 years ago Charlemagne and his knights ruled the Frankish kingdom, and here less than six years ago bitter fighting destroyed much of the beauty and worth of the forests. During the past year more than 2,000 acres of these woods have been cleared and homes built or started for five hundred families. Some will earn their living entirely from working the soil, others will work in the community village which is being built. Very soon a school will be completed and the children will no longer have to make the long trip into Kleve where the nearest school is now located. 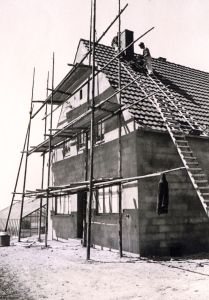 A home goes up in the Reichswald settlement, 1950. Photo courtesy of Heimatvereins Reichswalde.

On one of the 35 acre farms in this community lives widow Queling with her eight children. Her husband met with an accident last year and was killed leaving the mother and children to carry on alone. Both she and her husband were born near the Reichswald area and migrated in 1928, after their marriage, to Silesia on the German-Polish border. In 1945 the war overtook them; they had to leave their farm and livestock and make their way as best they could into western Germany. Then followed years of hardship, when hunger and want stalked the land and the struggle for survival was fierce. The Quelings lived during that time with relatives in a village some miles from the Reichswald. Late in 1949 the news came to them of the opportunity to establish their own home and start a new life here. The German Government was helping families to clear the forests, to break the land and to have their own home for the first time in years. Soon thereafter the family joined in the work of clearing stumps and getting the ground in shape for the spring planting.

Their joy in building a new home was turned to sadness by the death of the father in December and the family had to carry on the struggle alone. Finally a part of the land was cleared and potatoes, oats and hay were planted. Last June brought happy news again to the Quelings and to Reichswald. Forty-two heifers, some already giving milk and others to freshen soon, had arrived in Bremen; sent to this new community by Christian friends in the United States. From Indiana, Ohio, Pennsylvania and even as far away as Oregon, these heifers had been sent by people who wished to share their abundance that others might be helped to a better life. 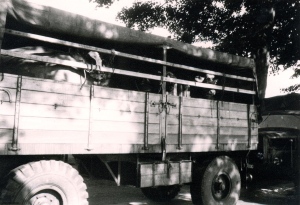 On June 22, 1950, 42 heifers arrive for distribution in the Reichswald settlement. Photo courtesy of Heimatvereins Reichswalde.

Forty-two of the neediest families in the Reichswald received one heifer each. The Quelings waited expectantly to see which theirs would be. Finally the cattle arrived from Bremen and the selections were made. The Quelings led their newest possession, a red and white heifer, to her new home. She had been given by Henry Kirk and had come from Halse, Oregon; more than 7,000 miles by railroad, by ship, and by truck. During the day the cow would be turned out to pasture in an adjoining field and brought home each evening by the children so that she could be milked.
. . . .
We could continue the story of hundreds and thousands of Quelings and Geils and Kirsches. Their stories are different, yet alike. All have known the bitterness of hunger and cold and hopelessness. Some know also the joy and hope inspired by a future wherein they can begin again and the knowledge that someone in America has cared enough to send them help — even from 7,000 miles away. 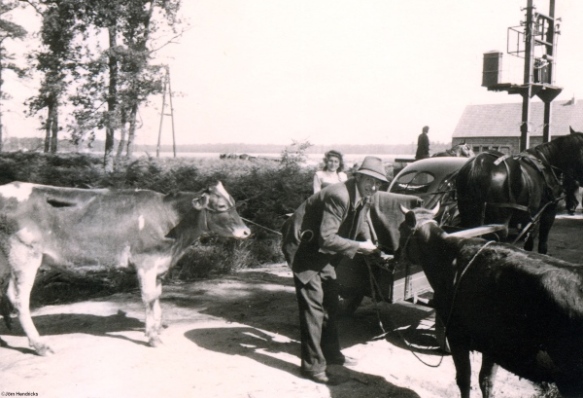 Next regular post: My visit to the Reichswald recipients