When the Heifer Project made their first shipment of cattle to Czechoslovakia in January 1946, recipients were encouraged to send photos and letters to the Heifer Project office to be shared with the donors of their animals so international correspondence could develop. Here are some translated excerpts:

“I am a widow. My house and barn burned down during the war and the cow in the barn as well. Some weeks ago I was advised by our local National committee to go to Moravaska Ostrava, where a cow shipped from USA is ready for me; I could not believe it, but it was true and when I brought her home we all wept being deeply touched by the generosity of yours. The children take care of the cow every day on the pasture.” Anna Hravcikova, Zabreh 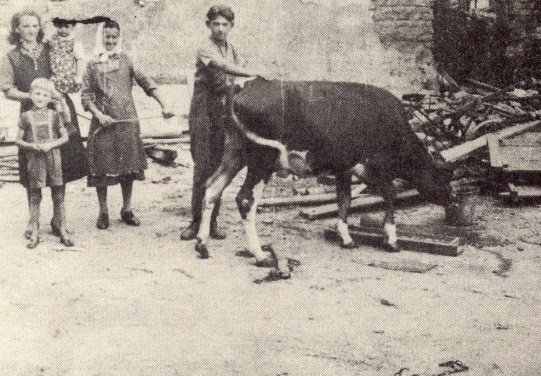 “The war razed our buildings, killed livestock and nothing was left except our ravaged home…. When the cow arrived there was much happiness. Five eager children jumped about me and the cow. When I brought the first milk they stood around with their little pots each one eager to taste the milk from America….” Anna Dostalova, Stepankovice

“I thank you most sincerely in the name of my family of 7 for the gift of a cow. It came to us at the right time and helped us when we were most needy….An old slogan of ours has been proven— ‘When need is greatest, the help of God is nearest!’ ” Joseph Yolat, Zarubek

“With feelings of deepest gratitude we received from you a priceless gift—a cow for our Evangelical orphanage in Trinec near Tesinsko. Toward the end of the war our orphanage invaded by the German armada was completely damaged….Out of sacrifices of members of our Evangelical Committee we began slowly to rebuild the orphanage….We had a big holiday when we brought the cow home. No one could believe that it was given to us free…..” Parish Priest, Trinec

The grateful Frank Vojkuvka family with their donated cow, 1946. “Your gift was for us a great surprise,” they said. Photo courtesy of the George Craig family.

“I am beginning alone because until now my husband has not been reported. I am alone with two children—a 5 year old and a three year old boy, also an elderly mother….Our entire farm was demolished….[Our cow] means for me the greatest means of livelihood. It has become a member of our family. I thank you dear friends most heartily for this precious gift and believe me that we will think of you the rest of our lives and be grateful.” Elizabeth Moravcova, Bolatice

“We and the children are looking forward with joy to pasturing the cow; and we shall sing in doing it—after which it will give us more milk.” Josef Hornik, Kozmice

“We had been expelled by the Germans from our birthplace and during the time of occupation we were with our five children in a small camp where we had to live on ration cards. Milk never was sufficient. The children suffered terribly. After the liberation of our country, we returned and found a completely devastated homestead….By your beautiful gift you helped us a lot….I send you my heartiest thanks.” Family Rajnochova, Skorotin

The Frantisek Martinik family in front of their ruined home, 1946. Photo courtesy of the George Craig family.

“The friendly and sacrificial attitude of the selfless Americans in help to the Silesian people is proving that there are still good people in the World despite of the hatred in Warfare and that Love didn’t die and never will in human hearts.” Frantisek Martinik, Vresine

May we continue to prove through our actions that there are still good people in the world.

The Czechoslovakian Embassy in Washington, DC, expressed interest in Heifer Project’s offer to send cattle to that war-torn country in early December 1945. In the short time of one month, all red tape was cut and 171 heifers, donated by church groups from ten of the United States, departed from Baltimore January 6, 1946, on UNRRA’s S. S. Charles W. Wooster. On arrival in Bremen, Germany, the seagoing cowboys on this trip would have had similar experiences with those of UNRRA’s first shipment for Czechoslovakia. The animals, however, had little time to adjust to standing on solid ground. Czechoslovakian cattle experts transferred them into rail cars for a long arduous week’s trip to the Silesian area of northeastern Czechoslovakia, one of the regions that suffered the most during World War II.

The heifers arrived in Silesia in good condition February 4, where they were put in quarantine at the State Farm in Nerad near the border of Poland. After a meeting in Frydek to finalize distribution agreements, the officials involved drove some 25 miles to the farm to inspect the cattle.

“We crossed 29 wooden, propped up bridges, of very temporary construction, as all bridges in this region had been destroyed by the retreating Germans,” says Vlasta A. Vrazova of the American Relief for Czechoslovakia in a February 18, 1946, report to the Brethren Service Committee. “A year ago, war raged through this part of the country for many weeks. There is everywhere the same problem—empty barns. The Germans drove away all the cattle. In the Opava area 28,000 families were completely bombed out, another 20,000 families lost almost everything….Children are in grave danger. In first grade grammar school in the city of Praha 25 percent have tuberculosis and another 50 percent are on the danger line. The chief reason is malnutrition for five years….The crying need is milk!”

An UNRRA report describes the ceremony that took place at the State Farm on the handing over of the Heifer Project animals, along with 193 UNRRA cattle sent with them. In a “picturesque mountain village of Northern Moravia,” the report says girls in regional dress presented bouquets to the UNRRA and Brethren Service Committee representatives present. “After a formal reception, the traditional ceremony of village maidens wreathing cows with garlands of flowers took place against the background of snow-clad hills and dark pine forests.” Oh, for a photo of that ceremony!

The UNRRA report notes that some of the Brethren-donated heifers were bought with pennies from school children in Ohio. Dr. J. E. Sayre, of the US Fellowship of Reconciliation, who was traveling in Europe at the time, represented the Brethren Service Committee at the reception. In his remarks at the gathering, he said,

In this gift from the children of Ohio to their needy brothers and sisters in Moravia can surely be discerned the great spirit, not of the moment but of the years ahead, that must illuminate our troubled world. The children shall speak. I have traveled a long way to witness this consummation of the spirit of good will that began with the pennies of thousands of American children. I am happy to find the cattle in such good condition. To the children back home in Ohio I shall report: “Your pennies will soon be providing milk for the babies of Czechoslovakia, and this will be not only for this year but also for next year and for many years to come.” 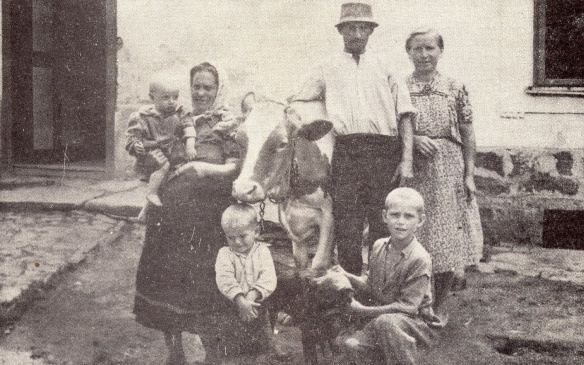 “This cow is our saviour from starvation,” the Kysuconova family tells their donor, Silesia, 1946. Photo courtesy of the George Craig family.