An undated newspaper clipping in the Heifer International archives carries this headline:

“Bride, Made Up as Negro Boy By Husband, Signed as Cattle Steward, Stows Across Atlantic”

The article, written by Harry P. Moore, appeared in the Norfolk Virginian-Pilot, circa early November, 1946.

At the end of World War II, when American troops moved into Poland, US Army Captain Paul K. Cowgill met and fell in love with a young Polish war widow, Katrinsyka Spicyk. Early in the war, the Germans killed her husband and forced her into slave labor. After meeting Captain Cowgill in 1945, the couple courted for a few months and were married. After Cowgill returned to the United States, they had a dilemma—how would they get Katrinsyka there? They were told it could take weeks or months for her to get accommodations on a passenger ship, and she wouldn’t be allowed on a freighter.

Their transportation problem was solved when Cowgill, now out of the Army, signed on to the S.S. Edward W. Burton which he knew was bound for Poland. The UNRRA ship departed from Newport News, Virginia, September 28, 1946, with a load of 810 horses.

The ship that carried Captain Cowgill to Poland, September 1946. Photo by Nelson Watts.

“On the way to Europe,” Cowgill told Moore, “I looked the ship over carefully and finally decided that a good hiding place would be a big ventilator that was used to supply air to the cattle in the ship’s hold.” He removed some “bolts and minor obstructions” and crawled into the space himself to test it out. It would work.

On arrival in Gdansk, he looked up his wife. Now the question was how to get her on the ship. He realized that the only dark-skinned people the Poles see are those who come on the crews of the US merchant ships. “It occurred to me that it would be just the thing to disguise my wife as a Negro boy,” he said. When they were ready to go, he blacked her face and they went down to the ship.

“She was carrying a few packages and I was ordering her about to make the guard on the pier believe we both belonged on the ship,” he said. The ruse worked and he was able to get her inside the ventilator without being seen. He took a blanket to her, and there she stayed for five days, eating what food he could bring her.

Once the ship was in the Atlantic Ocean, with no possibility of Katrinsyka being taken off ship in Europe and sent back to Poland, the couple turned themselves in to the Captain who questioned them separately. “The girl appeared frightened despite her black face,” he said. Satisfied that their stories matched, he decided to give them a break. He took their statements, made copies, and had them signed. When the Edward W. Burton arrived in Newport News, Captain Simmons accompanied Mr. & Mrs. Cowgill to Norfolk to straighten everything out with immigration and customs officials. 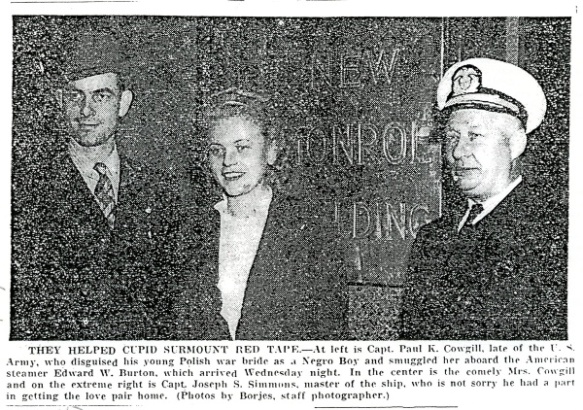 Photo from the Norfolk-Virginian Pilot.

“I am happy now,” Mrs. Cowgill said, “glad to be in America. It is such a fine place. Everybody laughs and I shall laugh, too.”

If my research is correct, the couple died just months apart in 2009 and 2010 and are buried side by side in Arlington National Cemetery, with Katrinsyka having changed her name to Anna Anita and her maiden name being Prosniak.