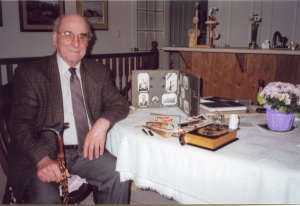 Norman Weber in 2006 in his home in Ontario, Canada, with memorabilia from his 1946 trip on the SS Occidental Victory to deliver horses to Poland. Photo: Peggy Reiff Miller

In my last post, we made the acquaintance of Norman Weber and John Wesley Clay, seagoing cowboys on the SS Occidental Victory in 1946. Their ship hit a rock before Thanksgiving off the coast of Finland, tearing open two oil tanks. The vessel was able to make it to Stockholm with its damaged bottom, but the dry docks there were unable to handle the repairs. On Thanksgiving Day, the ship left Sweden and made its way slowly and safely to and through the Kiel Canal, across the rough waters of the North Sea, and into the Weser River to Bremerhaven, Germany.

The Advent season between Thanksgiving and Christmas is often seen as a time of waiting, and that is precisely what these cowboys of the Occidental Victory had to do in Germany. Their ship sat in port for over two weeks before pulling into dry dock where she was to stay until the next August. Longing to be home for Christmas, Weber says, 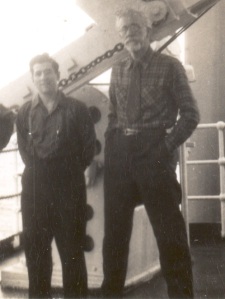 Norman Weber and John Wesley Clay wait aboard the SS Occidental Victory in December 1946 for a way home. Courtesy of Norman Weber

“All the seamen except a skeleton crew were put onto other ships. But it soon became quite evident that no one cared much about the cowboys.” So he and “Pop,” as he called Mr. Clay, decided they needed to take matters into their own hands.

“One cold day,” Weber says, “we walked to a bombed out Railway station. We managed to crowd into an already full train and for three cold hours traveled the 35 miles to Bremen. There we boarded a street car, and somehow got around the rubble of what was once a lovely seaport.” They found their way to the UNRRA office where calls were made to Washington, D.C. After several days of anxious waiting, a ship was found to take the cowboys home.

Norm Weber with two of the German children befriended by the Occidental Victory cowboys who fed them on the ship. Courtesy of Norman Weber

In the meantime, young Weber, a German-speaking Mennonite, and the elder John Wesley Clay explored the devastated cities of Bremerhaven and Bremen, making friends along the way. On December 15, the third Sunday of Advent, Clay and three other cowboys (Weber was sick and couldn’t go) attended services of a Methodist church in Bremerhaven. With their church building in ruins, the members met in one of their homes.

The remains of the Methodist Church in Bremerhaven, Germany, December 1946. Courtesy of Norman Weber

Before the war the church had more than three hundred members, but there were only fifteen present. A lay preacher held the services. It was the most depressing religious service I have ever attended. The hopeless expression on the faces of the people was more like a funeral service than a regular Sunday morning service. It was bitter cold outside, and the snow was falling thick and fast, and there was no heat in the building. The elderly woman who played the organ could hardly do so with her cold fingers. The lay preacher had lost his wife and children in the air raid. Many members had lost their lives, and many more their homes.

Oh, the horrors of war! May the good Lord spare us from ever seeing its like again. 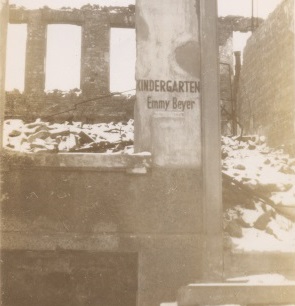 A fitting prayer for this Advent season.

In November 1946, three weeks into what would turn out to be a five-month trip, the SS Carroll Victory had unloaded its cargo of horses in Kavalla, Greece. Expecting to head home, the cowboys were surprised to be sent on to South Africa to pick up another load of horses. On its way, the ship docked in Haifa, Palestine, the day before Thanksgiving. Harold Jennings tells us in his diary,

We hired a truck for $4.00 round trip to Jerusalem – 27 fellows took the trip in spite of warnings from British soldiers of terrorists and the curfew, besides the roads being mined. Fortunately we were stopped only once by police and our coffee stop besides all rest stops. We arrived in Jerusalem about 5:00 a.m. [Thanksgiving Day]. 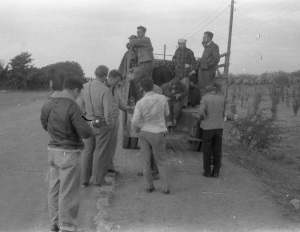 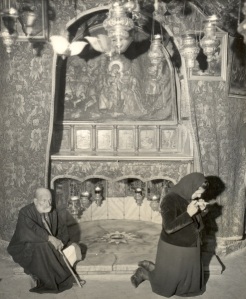 Altar in Bethlehem built in the place where the manger in which Jesus was born was believed to have been. The star on the floor marks the spot. Photo courtesy Charles Lord. 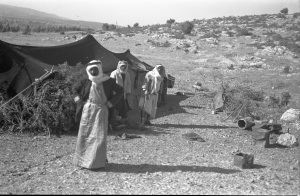 Charlie Lord summed up the day in a letter to his wife that evening: “Today was a page from a fairy book.”

While the SS Carroll Victory was sailing contentedly across the Atlantic that early November for its first stop in Greece, another ship met a different fate. The SS Occidental Victory carried a split cargo, with 193 horses on the top deck and 6,000 tons of sugar and 2500 tons of beef below. A mere eight seagoing cowboys and one veterinarian were required for this shipment. After unloading the horses in Poland, the men enjoyed the opportunity to explore the ports of Turku and Helsinki, Finland, where the sugar and beef were unloaded. 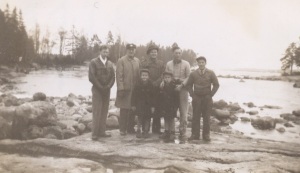 Vaino Aksanen and his sons take Norm Weber (right) and friends to the 1884 summer home of the Tsar of Russia near Kotka. Photo courtesy Norman Weber.

After more days in Kotka, Finland, to pick up paper pulp for ballast, the ship finally headed home. Cowboy Norman Weber recorded in his journal on Nov. 7,

This morning, good and early, we pulled out of Kotka….We’re beginning to hope to get home by the beginning of December.

About 1:30 P.M. we were sailing along smoothly, when suddenly our ship struck a rock. She jumped and hit again. It was a strange feeling, our great ship jumping like that….

Immediately the deck crew were busy opening the hatches and looking for water coming in. The great ship started listing, and there was much oil on the surface of the water.

The Occidental Victory was soon dubbed the Accidental Victory by the cowboys. She had hit a hidden rock and ripped open the bottom of the ship in two holds, puncturing the oil tanks. Weber explains,

The Victory ships have a double bottom, and in between are the oil tanks. Had this been a Liberty she would likely have sunk, but the second bottom seems to hold her afloat.

The ship slowly made its way back into Helsinki where it was inspected and deemed seaworthy enough to head on to Stockholm for repairs.

On November 28, Cowboy John Wesley Clay wrote in a daily account that he printed up and gave his fellow cowboys at the end of their voyage,

This is Thanksgiving day, and to the eight cowboys it has been the most significant Thanksgiving day we have ever spent. We limped into Stockholm [Monday], eighteen days after striking the rocks in the Gulf of Finland, and it was glorious to set foot on land again.

Our food supply had been almost completely exhausted, and we were approaching a desperate situation, but in Stockholm we found another American ship who divided supplies with us, so today we had a real American Thanksgiving, with plenty of turkey and all the fixings. We were thankful to the depths of our hearts.