I’ve been having great fun the past three weeks rummaging through boxes of Dan West’s correspondence at the Brethren Historical Library and Archives in Elgin, Illinois. Dan is the founder of Heifer International and was very active with the organization, serving as volunteer secretary of the Heifer Project Committee for many years. I’m finding a wealth of information that will help me flesh out a book I’m working on about the first decade of the Heifer Project. As I process the material I’m gathering, I’ll share snippets with you here. Like the following story that brought a smile to my face when I read it.

The year was 1949. The Heifer Project Committee had been making shipments of goats to Japan for over a year through the efforts of their representatives on the West Coast. Southern California rep David Norcross had sent a postcard to Dan West with this picture on it. 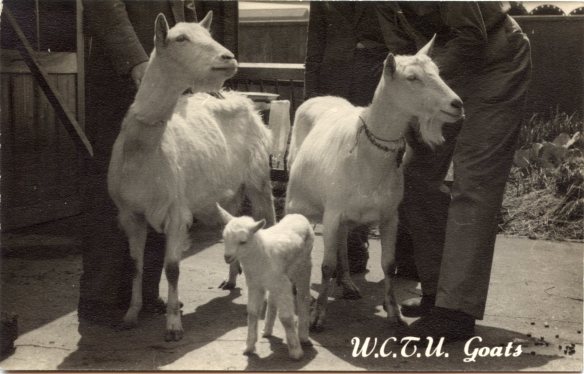 The two goats on the enclosed card traveled all the way from America to Tokyo last year. This in itself is not so very unusual for a goat, since over 2,000 goats were sent to Japan and Okinawa during 1948. However, these two goats are unusual in that they were given names before they left the boat, and those names have stuck with them.

The story has its beginning when Mrs. Amy C. Weech, honorary president of the Virginia W.C.T.U. [Women’s Christian Temperance League] office in Washington, D.C., sent $100 to New Windsor, asking that two goats be sent to the credit of her organization and be named “Temperance” and “Teetotaller.” The Southern California-Arizona branch of Heifers for Relief went out of their way to put tags on the chain with the number tag, and these names inscribed. The tags were given to the supervisor who, before reaching their destination picked out two good white does and fastened these tags on their chains.

It so happened that the number of goats was increased, as “Temperance” brought forth her first-born kid two or three days before the boat landed at Yokohama. The new little kid was given the name of “Purity.” Arrangements were made for the goats to go into the W.C.T.U. Rescue Home for Girls in Tokyo, where they were admired and were very welcome. Now they are furnishing milk for the girls at this home.

Watch for more of these snippets next year as Heifer International celebrates their 75th anniversary.