Our last regular post highlighted the sobering tour on which UNRRA took the seagoing cowboys of the S. S. Virginian on October 4, 1945. While the cowboys explored the countryside, the ship moved from Nowy Port outside Gdansk where the livestock was unloaded to the port of Gdynia further up the coast to unload the remaining cargo. It took only two days to unload the animals and any remaining hay and feed in Nowy Port, but another six days to clear the ship in Gdynia. 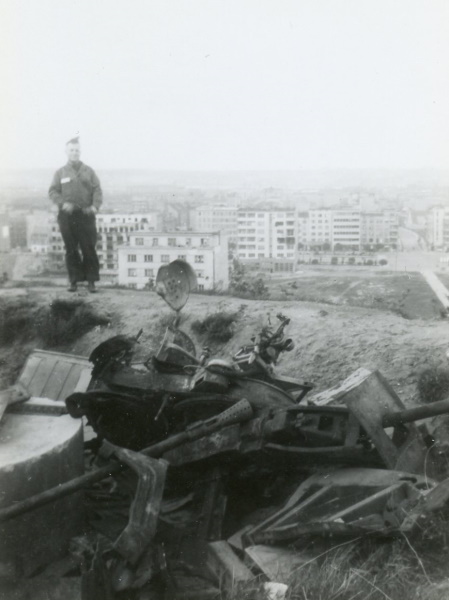 On a battlefield above Gdynia, Poland, October 1945. Photo courtesy of Lowell Erbaugh.

A newer city, Gdynia was not as heavily damaged as Gdansk. “The living conditions in this town are quite good compared to other towns nearby,” Ken Kortemeier says in his diary. 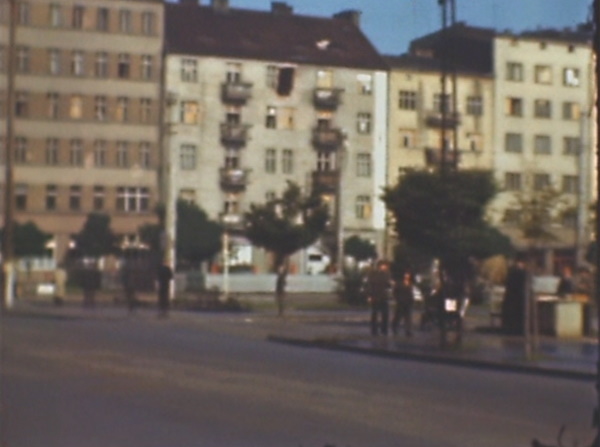 Unlike Gdansk where barter for candy, gum, or cigarettes was the name of the game for obtaining desired objects, the people of Gdynia were eager for American dollars. “It is interesting to look at the merchandise for sale in the stores and the amber articles for sale,” he says. “It is only found around the Baltic area where it is mined.” 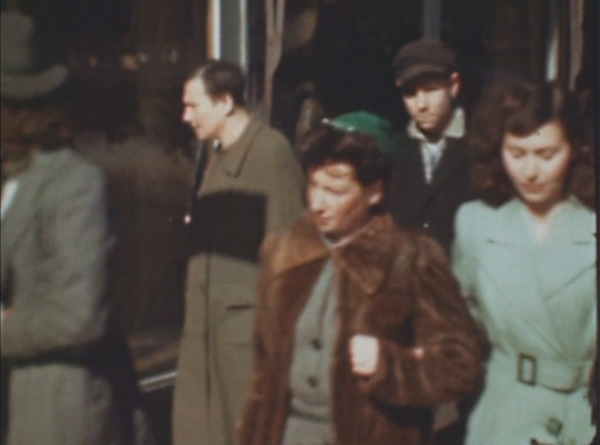 Street life in Gdynia in October 1945 was more normal than in nearby devastated Gdansk. Still shot from movie taken by Ken Kortemeier.

“The people as a rule are cheerful and we had many a laugh as we talked to the folks in stores and in the streets,” notes Harry Kauffman. “It was a much needed break from what I had been seeing and hearing, although we see here, too, the tragedy of war. I saw a young woman with only one leg walking on crutches and one young man with both eyes gone.” 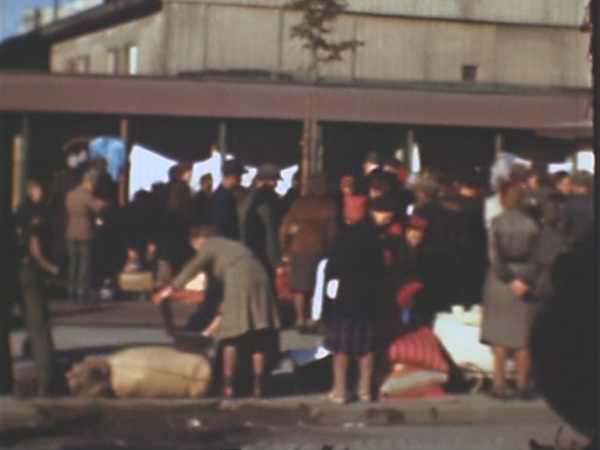 One day, Kortemeier and some friends went to the public market where he bought a German plate. “Hardware, dishes, clothes, rugs, etc., were all for sale,” he says. Kauffman adds, “Some of the sellers are perhaps dealers but many are poor people who sell anything they can possibly spare. Some cut glassware and chinaware looked very costly and some very old. All these things are sold for to get something to eat and to us Americans at only a fraction of their real value.”

All through their time in Poland, the cowboys continued to meet people who either wanted them to take letters with them to mail to relatives or friends in the US when they returned or wanted to be smuggled onto the ship to go to America. The S. S. Virginian left Poland October 10 with some letters in cowboy hands but no stowaways on board.

Cowboy supervisor John Steele had now been gone from home the total six weeks he had anticipated being away from his business. To his dismay, he would have another five weeks yet to go.