As World War II was ravaging Europe, a number of the allied nations hammered out a plan to help the devastated countries recover when the war ended. On November 9, 1943, forty-four nations, meeting at the White House in Washington, DC, chartered the United Nations Relief and Rehabilitation Administration (UNRRA).

Brethren Service Committee Executive Secretary M.R. Zigler was a real mover and a shaker, destined for his time in history. Source unknown.

The Heifer Project of the Church of the Brethren Service Committee was already underway at that time. Heifers were being donated and raised for shipment to Spain (see last post), with growing interest in shipping to Belgium, as well. M.R. Zigler, the executive secretary of the Brethren Service Committee (BSC), lobbied UNRRA during its formative time to ship Heifer Project animals to Europe. But many UNRRA officials believed shipping livestock was too hazardous an undertaking. Meanwhile, the Heifer Project successfully made their first shipment of animals to Puerto Rico in May 1944.

A year later, in early May 1945 as the war in Europe was coming to an end, the Agricultural Rehabilitation Division of UNRRA finally obtained permission to ship livestock. A request had come in from the Near East Foundation for bulls for Greece to help rebuild their devastated dairy industry through artificial insemination. UNRRA called on M.R. Zigler for help, and Zigler called on Benjamin Bushong, a Brethren dairyman and cattle breeder from Pennsylvania. 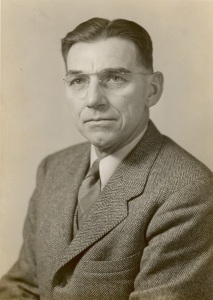 The bull Parnassus being led to the Greek Orthodox bishop for blessing. Courtesy of United Nations Archives and Record Management Section.

Bushong located six purebred Brown Swiss bulls that fit the bill. Heifer Project paid for and donated the bulls for UNRRA to ship to Greece. The bulls left St. John’s, Canada, May 14, 1945, on the SS Boolongena. That same day, the Ag Rehab Division of UNRRA requisitioned 600 mares and 600 head of cattle to be prepared for shipment.

Ships were lined up. Feed was purchased. But UNRRA had a problem: where would they get the men to take care of the animals on the ships? The UNRRA Livestock Program Historical Report says,

[M]ost available manpower was either in defense work or in military service. Faced with the problem of a ship soon ready to sail, the BSC was asked to supply enough men for this first vessel. Since the constituency of the Church of the Brethren was of rural background, it was believed that enough men could be found who had farm deferments and thus would be available for this voyage. In a short time enough men had signified their availability to man several ships and thus the program of recruiting ‘sea-going cowboys’ was begun.

An agreement was worked out between UNRRA and the Brethren Service Committee that the BSC would recruit the estimated 8,000 cattle tenders UNRRA would need for its projected shipments; in return, UNRRA would provide free shipping for the Heifer Project animals sent on UNRRA ships. By the end of the program less than two years later, about 7,000 men and boys ages 16 to 72 had served as seagoing cowboys on UNRRA’s 360 livestock shipments. They accompanied some 300,000 animals to Europe and China, of which 4,000 were from the Heifer Project.

You might wonder, why on earth did a church organization take on such a monumental task for a non-church agency? UNRRA’s historical report says,

The Church of the Brethren was and is actively interested in dynamic Christianity. The willingness to provide men for the first ships was due to a realization of an urgent need in a justifiable project which was in critical circumstances. However, the contracting for 8,000 men was based on broader and perhaps more fundamental reasons. First of all was the belief that the livestock program was one which was extremely significant for the rebuilding of war devastated countries. Because of the rural background, the denomination could use some of its abilities in this unusual work. It was also believed that for many such a trip would be an unusually broadening and educational experience which would express itself in an increased interest in the relief program, a better understanding of the effects of war on the lives of people, an active desire to build a better world. These may have been idealistic motivations but numerous examples can now be cited to prove the justification of such reasoning.”

And my interviews of well over 150 of these men bear this statement out.

Next post: Cowboys at sea and abroad on Thanksgiving

1 thought on “UNRRA and the Brethren Service Committee Partner Up”